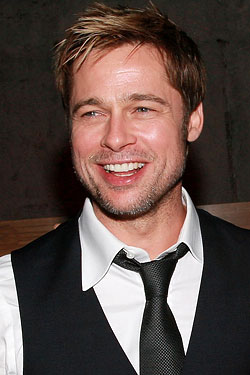 Sounds like New York might not be working out for the Jolie-Pitts. Brad totally loses it in Parade this week, talking about the crazy parents at the Lycée Française and the photographers who go bonkers every time they see him and the rest of the gang. “I understand the tabloid machine. There’s money to be made off of Angie and me, but it has gotten so out-of-hand.” Man, capitalism ruins everything!

“There’s no decency, even when it comes to our kids. I mean, yesterday Angie was taking Maddie off to school … There were 30 paparazzi outside. One guy sticks a video camera in Mad’s face, yelling, ‘Maddox! Maddox!’ He doesn’t get a response. He doesn’t know my boy. Mad is already savvy to this, unfortunately. But my 2-year-old dreads being anyplace there are cameras. It scares her. They’re all in her face. My kids are faced with this every day! It’s disgusting. So we’ve been run out of L.A., all the major cities. We just can’t live there. You don’t understand — this is the hunt, the hunt, the hunt! I thought it might be over a year ago. It’s gotten worse.”

Poor Brad. Though, wait a minute. We have an idea that might help get those tabloid paparazzi off your back! It’s easy. Stop talking to magazines about your personal life.


“I Have Faith in My Family” [Parade]

+Comments Leave a Comment
Brad on Paparazzi: It’s the Pitts