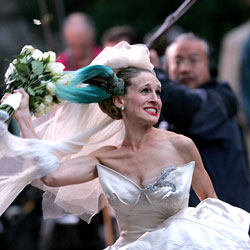 Sex and the City producers have to reshoot the wedding sequence between Carrie Bradshaw and Mr. Big at the New York Public Library because they rushed through it the first time. (Also, Kim Cattrall shows up to work last every day.) ABC contacted Cosmo’s hottest New York Bachelor of 2007, Patrick Clark, about staring in The Bachelor. Bonnie Evans, widow of Charles Evans (brother of producer Bob Evans), is putting up her Park Avenue triplex for sale for $30 million. Josh Hartnett claimed that “half–95%” of what is written about him is not true but declined to say whether his hooking up with Rihanna was included in that figure. The Autumn, the play starring Meryl Streep’s daughter Mamie Gummer, is coming to Broadway. Law & Order: SVU star Richard Belzer spends a lot of time looking for UFOs. Cindy Adams discusses reruns on TV.

Ellen DeGeneres once regifted a mutt named Stormy to a staffer after just two months. A private eye in L.A. is claiming that O.J. Simpson hired Hollywood P.I. Anthony Pellicano to bug and harass Nicole Brown Simpson. Tommy Lee and Cisco Adler are dating models Erin Nass and Ludi, respectively. Anna Wintour talked shit about Madrid’s Fashion Week. Salma Hayek is still planning on marrying François-Henri Pinault, despite the fact that he knocked up Linda Evangelista prior to their relationship. Rachel Bilson had to switch shoes on the way to a party in L.A. because Kristen Bell was wearing the same ones. Pink has rescinded her “don’t ask, don’t tell” cheating policy with biker husband Carey Hart and may be getting a divorce. Jermanie Dupri thinks Justin Timberlake is “very ordinary-looking” and not a great performer. Designer Valentino Garavani misplaced the Swarovski Fashion Rocks Lifetime Achievement Award he was given on Thursday night but ended up finding it. The rumored Whitney Houston comeback performance in London never materialized. Frankie Muniz chatted up Karolina Kurkova. Kathy Griffin and beau Steve Wozniak made out at the Monte Carlo in Vegas.

THE FEED
22 mins ago
2022 midterms
2022 midterms
Another Former Lover Accuses Herschel Walker of Misconduct
By Ed Kilgore
Many women have painted a portrait of Walker as an unstable and violence-prone man possibly suffering from untreated mental illness.
9:58 a.m.
early and often
early and often
Democrats Should Worry About Signs of Lower Black Turnout
By Ed Kilgore
Even in states where Black candidates headed up Democratic tickets, turnout was down. Democrats need to figure out why that happened.
9:15 a.m.
the money game
the money game
Why The Economy Is Starting To Feel Good All Of A Sudden
By Kevin T. Dugan
The Federal Reserve looks ready to ease up on throttling the economy. Have we averted disaster?