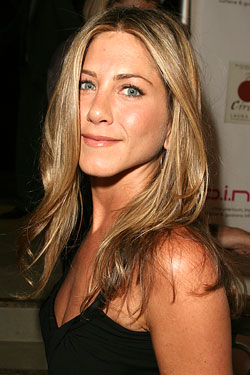 Jennifer Aniston says she’d like to move to New York in the latest issue of Harper’s Bazaar. “I don’t know, I’m just tired of Los Angeles,” she told the fashion mag. “In New York, you’re not just in that same car, looking at that same dashboard, driving down the same street.” We know your first reaction is, What will the Jolie-Pitts think, since they’ve only just set up house here? But we think the bigger news is that there’s lately been a celebrity diaspora. Many stars are leaving their traditional homeland of Los Angeles and winding up living in exile in New York. After the Jolie-Pitts came Lindsay Lohan, who is a symbol of La La Land practically as important as Grauman’s Chinese Theater (and has welcomed nearly as many visitors).

Following the trail of her firecrotch as it travels east is Brandon Davis, who is coming here to be an art dealer (you can practically hear Larry Gagosian cackling all the way from Madison Avenue). Sarah Michelle Gellar and her pink bicycle (no, we don’t mean Freddie Prinze Jr., but he’s here too) have been tooling around town of late, and it seems like Natalie Portman and her boyfriend/accessory have come home to roost for a while, too. So what gives? Is it that the paparazzi has finally made Los Angeles unlivable for the famous? Yesterday it was announced that TMZ.com’s eponymous celebrity daytime show was the top-rated program in syndication, by a long shot. This is due to the fact that they’ve effectively blanketed the Thirty Mile Zone (Los Angeles) with photographers, spies, and videographers, which can provide almost constant coverage of America’s tabloid-selling stars. And they’re obviously not the only ones at work — nowadays even kids out there are running around with cameras, trying to get in on the action. Can it possibly be true that we’ve overtrampled celebrities’ natural habitat and made them flee for greener (okay, grayer) pastures? Yeah, that could be it. Or it could just be that it’s really fucking annoying to be stuck in traffic all the time.

+Comments Leave a Comment
Celebrity Diaspora: Jennifer Aniston Wants in on NYC, Too!