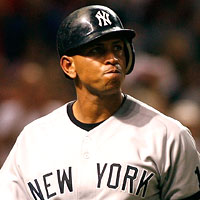 A-Rod and ur-agent Scott Boras dined at Nello’s. Eva Mendes hopped in the wrong limo. New York’s First Lady Silda Wall Spitzer told attendees of a More-magazine convention that the best advice she ever got was “either piss or get off the pot.” Cisco Adler and Lydia Hearst were cozy at Bungalow 8. Jann Wenner was widely mocked at the 30th reunion party of the Rolling Stone staff from 1977 (everyone gave him the finger in the group photo, and no one drank the Champagne he sent). Joaquin Phoenix hung up on a reporter from Time Out after she asked him what he did to prepare for his roles. Single-again Nick Cannon hung out with a bunch of beauty-pageant queens at Tenjune.

Newlyweds Pamela Anderson and Rick Solomon are pregnant. Brian De Palma accused Mark Cuban of censoring the ending of Redacted (which Cuban funded), though Cuban’s side claims it’s a legal issue. A new book about stand-up comics contends that Robin Williams is a joke stealer and that an up-and-coming Jerry Seinfeld wasn’t allowed to perform at the Comedy Store in L.A. because he was too popular. Kimora Lee Simmons and Djimon Hounsou went to Sandals in Antigua because Kimora is trying to get knocked up. Lindsay Lohan wants to move to Utah to be with her new boyfriend, snowboarder Riley Giles. Philly newscaster Alycia Lane says that her full lips are the result of makeup, not collagen injections. Zalmay Khalilzad, the American ambassador to the U.N., has a suite in the Waldorf, though he lived in a steel box when he was in Afghanistan. Mark Badgley and James Mischka don’t mind that their fashion label is often mispronounced. Anthony Bourdain think it’s unethical that Rachael Ray endorses Dunkin’ Donuts given that there are so many fat people in America. Yves Saint Laurent, 71, is looking rather sickly. John Clarke Jr., the new editor of Wonkette, used to work for Maryland’s Ruthann Aron, until she was convicted of trying to put a hit on her husband to fund her Senate campaign. Gabriel Byrne couldn’t remember the name of the movie he just made. Liz Smith says that our obsession with celebrity is a by-product of not being able to deal with the “serious issues” around us.