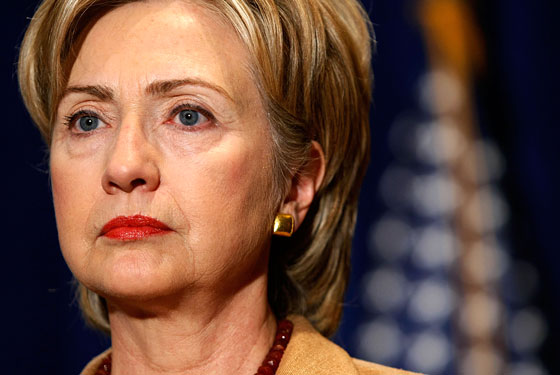 Will unsavory connections be the slow death of Hillary Clinton? The Democratic candidate, of course, has run a near-flawless campaign so far, forcing the press to obsess over her body instead of her platform, but the swarm of characters around Camp Hillary is beginning to look like a liability. First there was the twitchy fugitive fund-raiser Norman Hsu. Then one of her donors and Bill’s golfing buddies turned out to be mixed up in a scary cultlike organization. Now comes the word that Mark Penn, Hillary’s longest-serving adviser, also runs Burson-Marsteller, a company doing PR for the mercenaries of Blackwater.

Whoops. The unfortunate connection rips the teeth right out of an incredibly effective bit of anti-Bush rhetoric (Blackwater, from their name and logo down, are — in the words of Stephen Colbert — cartoonishly evil). It also means Hillary now has the dubious honor of having been linked to a Whitewatergate and to a Blackwatergate. Right-wing bloggers are already crowing about how the Dems won’t be able to use Blackwater as a handy symbol of everything that’s gone wrong in Iraq. The logic here is beyond flawed (does the Hillary link means everything’s gone right?), but it’s exactly the kind of logic that wins debates. In the coming months, as even the GOP realizes Hillary’s health plan sounds pretty damn appealing, expect them to reach deeper and deeper into the Clintons’ motley collection of associates for damning, if tenuous, connections. But not to fear. At least Hillary just scored a ringing endorsement from an influential old friend — George McGovern. Hoo boy.

+Comments Leave a Comment
Clinton’s Blackwatergate: If You Thought Whitewatergate Was Bad…