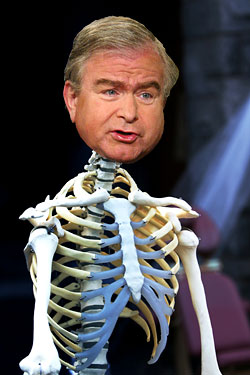 It seems like “the Clintons surround themselves with shady businessmen” is now an established, GOP-approved meme of this campaign season; unable to find any scandal in Hillary’s past they hadn’t beaten to death fifteen years ago, the right-wingers are officially going after her inner circle. As John Heilemann wrote in the magazine, the recent weeks reminded us, “in the form of the metastasizing scandal around Norman Hsu … of the dark side of the first Clinton era.” This is exactly the memory the opposing camp is hoping to keep going. And although none quite seem to have stuck, at least three other unsavory associations have popped up in one week. Adviser Mark Penn has a Blackwater tie! Bill’s buddy Richard Mays is in a cult! But there’s one question: Who is at the center of all this?

Surprise, surprise: It’s the Post. Murdoch’s tabloid has been uncorking exclusives — Blackwatergate, NXIVM-gate — like revelers opening bottles of bubbly. (And here we thought the Clintons and Rupert had some sort of a truce deal going on.) The Post’s latest discovery, of course, is that Sandy Berger, on probation for filching classified documents from the National Archives, helps steer things behind the scenes. Clinton immediately distanced herself from Berger, telling USA Today that “I have thousands of unofficial advisers.” Well, then, this gives the Post thousands of résumés to impugn. We’re in business until November 2008 — at least.