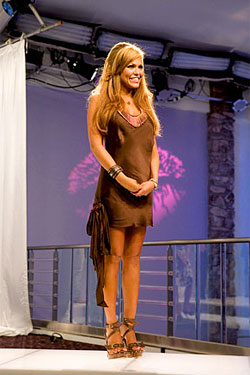 Jamie Everett is the new face of Columbus Day.Photo:Courtesy of VH1

Did you know that New Yorkers were the first people to celebrate Columbus Day as a holiday? Neither did we; we just read it on Wikipedia. But if that’s the case, shouldn’t it be a bigger deal here? Why are so few of us (except the Scottos) celebrating it today? One could argue that it is because Christopher Columbus not only didn’t really discover America but was, you know, a syphilis-riddled dick who, with his buddies, decimated the Native American population. But let’s be honest, who examines the historical significance of a bank holiday that closely? (Hello, President’s Day?) A day off is a day off. The truth is, there are three real reasons we don’t take Columbus Day off anymore.

One is that New Yorkers are workaholics. The second is that there is no merch that lets us know we should be celebrating. There are no cardboard cutouts of the Nina, the Pinta, and the Santa Maria to post to our front doors. No tissue-paper garlands or fauna to erect in our living rooms. And the third and most reprehensible reason we don’t celebrate Columbus Day is this: There are no rituals. No one shoots off fireworks or barbecues or even holds an annual mattress sale. This upsets us, because what it adds up to is a gradual phasing out of the holiday, i.e., one of few precious days left on the calendar that it’s okay to lie around and eat things and not feel bad about it. And so today, we at Daily Intelligencer are fighting back. We refuse to let this opportunity to celebrate America by sitting slack-jawed on a weekday slip through our fingers. We are taking off the rest of the day, and we are instituting a new Columbus Day ritual. From now on, we will spend the second Monday in October watching reality television. Starting with America’s Most Smartest Model. Why? Because reality TV is symbolic of what America is and who America’s people are. (And because AMSM ripped their name off that show from Drop Dead Gorgeous, a.k.a. the greatest American pageant movie ever, and also, it’s awesome.) What better way to celebrate the achievements of our civilization than to sit down with a glass of Olde English and watch the debut of I Love New York: Season Two? Our forefathers died so that we might have a democracy, one in which we can enjoy an afternoon watching a rich lady pick out jewelry and make her hair bigger on Kimora: Life in the Fab Lane. The meritocracy in which we take so much pride has never been more beautifully exemplified than in Heidi Montag’s rise to fame and fortune on tonight’s Hills recap episode.

What could be more American than a celebration of a place where stupid people can win, terrible people can become popular, and beautiful people are openly mocked? We’re really hoping this catches on. Because if we start a cultural movement, we’re less likely to get in trouble for the fact that we’re about to take the rest of this beautiful day off to stay inside and watch TV. Starting now.

+Comments Leave a Comment
Columbus Day: Is There Anybody Out There?