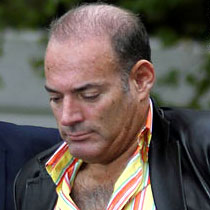 They don’t have magenta suits in prison.Photo: NyPost.com

It’s Friday, and the sweet smell of Schadenfreude is in the air! Remember David Brooks, the Long Island defense contractor who threw a $10 million bat mitzvah for his daughter Elizabeth at the Rainbow Room two Thanksgivings ago? You know the one: Nelly, 50 Cent, Ciara, and Don Henley played, and Aerosmith headlined — with Brooks’s nephew on drums, and Elizabeth doing a duet with Steven Tyler. The whole thing last until 3:30 a.m., and even though Brooks, who presided over the affair in a magenta suede suit, skimped on paying the wait staff, all the kids went home with $1,000 goody bags containing iPods and digital cameras. That is criminal, you might have said to yourself when you read about it in the paper later. And guess what? You were right! Brooks was slapped with a 21-count indictment yesterday, which included charges of insiders trading, securities fraud, and tax evasion. Poor Elizabeth! Her birthday is in November. But look on the bright side. This will make for a great episode of My Super Sweet 16!

THE FEED
12 mins ago
poll position
poll position
Why Are Pollsters Disagreeing About the 2022 Midterms?
By Ed Kilgore
If one influential Republican-leaning pollster is right, Patty Murray and Josh Shapiro should be worried. Others scoff at the idea.
10/1/2022
what we know
what we know
Hurricane Ian’s Death Toll Continues to Climb
By Intelligencer Staff
Rescue efforts are still underway in Florida, where inland flooding continues to hamper recovery efforts.
10/1/2022
just asking questions
just asking questions
The Surge That Could Save Democrats
By Nia Prater
Tom Bonier makes the case that women are registering to vote in a fury after Dobbs and have the potential to reshape the midterms.