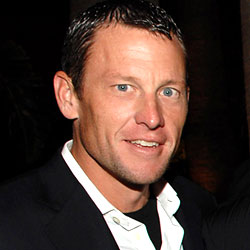 Lance Armstrong and Ashley Olsen hooked up at Rose Bar and then left at 2 a.m. The Jewish Theater of New York claims that the Times won’t review its plays because the paper is anti-Semitic; the Times says it won’t review its plays because they are bad. Kim Cattrall actually showed up to work before the other SATC cast mates for once. AOL chairman and CEO Randy Falco was roasted by Bob Costas and Brian Williams, among others. Ivana Trump made a kind of funny joke about Harper’s Bazaar editor Glenda Bailey being the devil in Prada at Denise Rich’s Angel Ball. (Diddy also left the ball with model May Anderson.) Michael Jackson went to Brooklyn to shoot a cover for Ebony magazine and was sweet despite prattling on about how much he likes kids.

Jessica Simpson and Owen Wilson went on a date in Santa Monica and then back to his home in Malibu. Jive Records is allegedly giving up on promoting Britney Spears and hasn’t even arranged a tour for her. J.Lo’s next film, Bordertown, is going straight to video. Barbra Streisand will perform next month at the opening of Planet Hollywood in Vegas, despite claims that she’s retiring. Real-estate developer Stephen Ross bought a house in Palm Beach for $32 million. Brett Ratner led a band of students from the Savannah College of Art & Design on a late-night quest for a topless bar in South Carolina. Karrine “Supahead” Steffans claims ex-boyfriend Bill Maher doesn’t respect women he can’t put down. Memo to Mets fans who have yet to receive a refund on their playoff tickets: Your check is in the mail! Producers are looking for an unknown, “tall, blond hunk” to star in Tab Hunter: The Making of a Movie Star. Mischa Barton’s sister Hania showed up to a fashion show too drunk to model and to a club with legs like “jelly.” Natalie Portman, Lucy Liu, and Maggie Gyllenhaal were at the Prada party at Cafe Carlyle. Kiefer Sutherland no longer signs autographs in the wake of his DUI arrest. Kim Kardashian chose the December issue of Playboy to declare herself not “slutty.” Chris Rock has visited the same stripper at the Hustler club three times this month. Cindy Adams says that the Monica Lewinsky costume is “big” this year.

+Comments Leave a Comment
Ew, Lance Armstrong Is Hooking Up with Ashley Olsen?

THE FEED
2:00 p.m.
early and often
early and often
Trump Is Upset That Android Hasn’t Approved His Nonexistent App
By Margaret Hartmann
He’s wondered, “Is Google trying to f- - - me?” Maybe, but the more immediate issue is his own company hasn’t submitted an app for Android.
1:53 p.m.
health
health
What the World Needed Now Was a Monkeypox Outbreak
By Benjamin Hart
Experts say the risk of serious spread is low. Let’s hope they’re right this time.
11:49 a.m.
the bottom line
the bottom line
Nationalize Baby Formula
By Ross Barkan
And other ideas to end the corporate stranglehold over mothers and children.