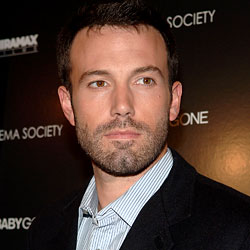 Ben Affleck slipped out of the premiere of his Gone Baby Gone to go watch the Red Sox game. (Ben says he left because he gets nervous during his screenings. Cindy Adams thinks he’s getting “gorgeouser and gorgeouser”). Fifty of the world’s greatest chefs are having dinner tonight at Le Bernadin to celebrate the book My Last Supper. Le Cirque owner Sirio Maccioni shelled out $7,000 for a 1.1-pound Italian white truffle. Tim Robbins had his birthday party on Tuesday at the Beatrice Inn. Barneys creative director Simon Doonan thought Phillip Bloch had gone blind, though he was actually just preparing for a movie role.

Veronica Hearst might have to give up her 5.1-acre estate in Palm Beach after defaulting on $33 million in mortgages and loans. Half an hour after checking out of rehab for cocaine-induced hallucinations, guitarist Slash downed half a liter of vodka. Ivana Trump’s wedding to Rossano Rubicondi is slated for April 12, and Donald Trump might actually give her away. The Donald also said George Clooney was much smaller than what he was expecting when he met him. Lily Allen was spotted looking “tired and emotional” at the after-party for Kate Moss’s Topshop collection in London. Ted Maher, the male nurse who was jailed for starting the fire that killed billionaire banker Edmond Safra, was thrown back in jail for violating a restraining order his wife has on him. Egyptian United Nations ambassador Maged Abdelaziz spat on a Secret Service agent at the U.N. The ex-fiancée of the guy Lindsay Lohan is dating says the last straw was when she got a text message saying he’d had sex with Lohan in the stairwell of the rehab center. (Also, he gave her a fake diamond engagement ring.) Lindsay Lohan’s uncle was busted for DWI and drugs. A bunch of crew members on Spike Lee’s new film are still owed money for services rendered. Shannon Elizabeth lost a $100,000 charity poker game to investor Mark Lotke. Director John Sayles can’t play basketball anymore because of his bad knees. Tina Fey walked a baby stroller down West 79th Street with her husband.