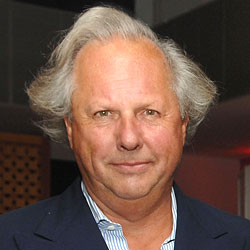 David Boies, Al Gore’s lawyer in his recount battle against Bush in 2000, may have taken on Blackwater CEO Erik Prince as a client. The 2008 Zagat’s says that the Waverly Inn is owned by “Grayson Carter.” Deepak Chopra likes telling bad jokes about the president. A random crowd outside the French Institute was invited to watch a screening of Tina Fey’s Baby Mama and enjoyed it. Vince Vaughn hung out at the Rose Bar and the Box on Saturday. Mariah Carey promoted her new perfume at Macy’s Herald Square. Fox Business Network is throwing a launch party tonight at the Metropolitan Museum of Art.

Some residents of Katonah are still mad that Martha Stewart tried to trademark their town’s name and are roasting her in Times Square on November 13. A lot of valuable Elvis memorabilia was destroyed in the Malibu wildfire. Barack Obama worked out at an Equinox in L.A. with his iPod. A pregnant woman asked Richard Gere to bless her belly. Sharon Bush claims that TV evangelist Joel Osteen helped “heal” her after her divorce from Neil Bush. Nicole Kidman’s next flick, The Golden Compass, may or may not be terrible, depending on whom you believe. Brad Pitt has a sense of humor about the fact that Jesse James did not do so well at the box office. Britney Spears’s backup dancers from her wretched performance at the MTV VMAs have yet to be paid. Bill Clinton toasted Tom Brady as the “greatest quarterback in the world” at a club in Miami.

+Comments Leave a Comment
Graydon Carter Never Gets Any Credit