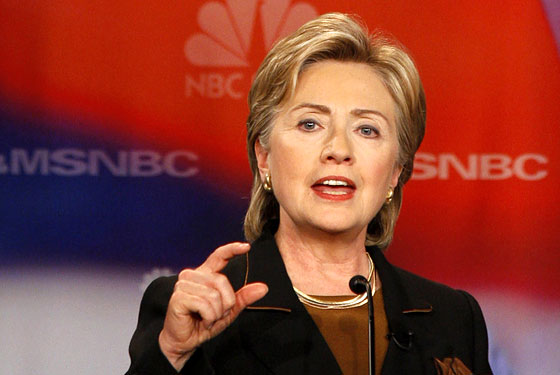 Much ado was made this morning over the way the other candidates turned against Hillary Clinton during last night’s Democratic presidential debates. Obama and Edwards went after her so aggressively (especially regarding her refusal to clarify whether she supports Eliot Spitzer’s licenses-for-illegal-immigrants plan) that Bill Richardson even said, “I’m hearing this holier-than-thou attitude toward Senator Clinton. It’s bothering me because it’s pretty close to personal attacks that we don’t need.” The question is, is this kind of response to Clinton’s wide lead in the polls coming too late to do any good for her rivals? Having Obama and Edwards focus on her made her the star of the debate, even if she made some missteps. Just look at the Times ingenious “Transcript Analyzer” to see who managed to speak the most during the debate: Hillary got out 25 percent more words than anyone else and managed to insert herself most frequently. And just as her opponents started making her their main focus, she’s shifting into general-election mode. Refusal to give a solid answer on a divisive issue like licenses for illegal immigrants is a move clearly designed to avoid offending both Republicans and Democrats. If Hillary continues to behave as though she’s already won the primary, it’s sure to make Obama and Edwards go even more ballistic. Which has us so excited, because nothing is more entertaining than watching a pretty boy stomp his feet.

A Pitched Debate: Clinton Hears It From Her Rivals [NYT]

+Comments Leave a Comment
Hillary’s Rivals Turn on Her But Find Themselves Barking at Her Heels (Okay, Flats)