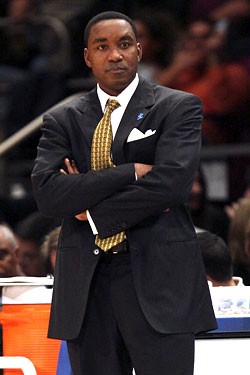 So it appears the jury in the Isiah Thomas sexual-harassment suit plans to side with Anucha Browne Sanders. A note from the panel to the judge yesterday said they were deadlocked over whether to make the Knicks coach pony up for punitive damages, as apparently there is a lone holdout who thinks he needs to save his money for more fancy ties. (We bet we know who that is.) Having deliberated overnight, they’re expected to come out with a verdict today (or the Knicks will finally settle). In the meantime, the Daily News’ Jane Ridley is in a reflective mood, and today, she offers up more of her particular brand of Confucian wisdom: “Justice is not like a basketball court,” she cautions. “Tides are rarely turned by a single flashy play or a lucky catch.” That’s so Jane!

• “A gazillion dollar salary might get you designer suits and the best table in the restaurant, but it can’t buy class and judgment.”

• “Browne Sanders wouldn’t play the game and stuck out her neck. It was promptly cut off. But, thanks to her courage, she kept on squawking.

• “In my book at least, plain-speaking counts for a lot.”