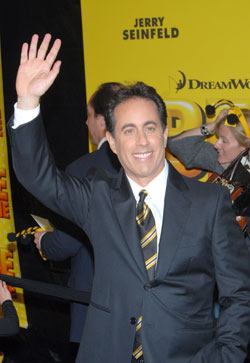 This is not a wax replica of Jerry Seinfeld.Photo: Getty Images

“Nobody cares about me anymore; I’m old, I’m out of it; it’s over,” Jerry Seinfeld told us last night at the premiere of the hotly anticipated Bee Movie. Hahahahaha!! See why he makes the money? He’s such a jokester! In reality, dozens of reporters were clamoring for the comedian’s attention, including a pretty blonde from In Style “Are there any beauty products you like?” she asked, earnestly. “Beauty products?” Seinfeld said, making a mock-confused face. “You might wait till the women come along for that question,” he said. “This isn’t Queer Eye for the Straight Guy!” Ha! In Style looked genuinely confused. “But…” she said, looking sadly at her tape recorder. “Do you have something that you do before you come on the red carpet?” Seinfeld gamely tried to answer. “I like to have my wallet with me,” he said. “George Burns’s first rule of show business is always take your wallet onstage with you. Because people backstage seem nice, but you never know.” Right? We hear that Renée Zelleweger has sticky fingers. It was perhaps not the answer that In Style expected. She made one final attempt. “How do you feel about plastic surgery?” she asked. “Good!” Seinfeld said. “Really good. As long as it’s not mine. I don’t want to get any.” In Style was not amused. “Thanks,” she said, and shuffled away. —Ben Kawaller

In Style wasn’t the only one who had a rough time on the red carpet last night. Click here to read an interview in which New York’s Ben Kawallar tanks big-time with Bee Movie directors Simon J. Smith and Steve Hikner.

+Comments Leave a Comment
Jerry Seinfeld Tortures ‘In Style’; We Rub It In