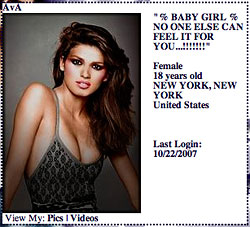 Maximilia Cordero, the 23-year-old “model” who sued Jeffrey Epstein last week, claiming that he took advantage of her when she was 16, has turned out to be a dude. This morning’s Post reports that Maximilia was born Maximillian in 1983, but has been dressing up as a girl since the age of 12. Her MySpace profile, under the name Avarelle Cordera, says she is a 17-year-old model, “Oh and I’m a junk head (pills , designer substances and my fav disel) What girl in this indistry [sic] isn’t :)Just being honest:)”
“She’s female, and she’s always been a female,” her lawyer-boyfriend, noted philosopher and friend of Daily Intel William Unroch told the Post confidently. “I may also be a female. I’m checking with my doctors,” he said. Avarelle/Maximilia/Maximillian has also been known as Ava, or she was last year when Unroch sued one of his neighbors for saying he lived with an underage girl and made her “nervous” and fear for her kids. “She’s a nice young lady who is certainly not underage,” Unroch, 57, told the Post of “Ava” at the time. Well, one of those things is true!

UPDATE: As an astute reader pointed out, the picture on her MySpace is actually Gia Carangi

+Comments Leave a Comment
Maximilia Cordero Is a Dude