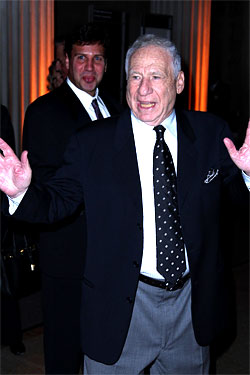 On Wednesday night when we ran into Mel Brooks at the Fox Business Network launch party, he told us that he was still making “nips and cuts” to his new Broadway show, Young Frankenstein, which is in previews right now. “It’s going in the right direction,” he assured us, jollily. But apparently Mel is painting a rosy picture. In today’s Post, Michael Riedel reports that Brooks and the Frankenstein crew are panicking because lead actor Roger Bart’s back problems are going to prevent him from taking the stage in most performances. He has a talented understudy, but Riedel’s source (someone ridiculously nicknamed “Deep Abby Norman”) says that producers are looking for a more famous lead. Eddie Izzard and Hugh Jackman have both been mentioned. We’re guessing, though, if he happened to ask Rupert Murdoch and Roger Ailes at the FBN party for their thoughts, they’d have given the same advice we will: Pick whoever is the hottest.