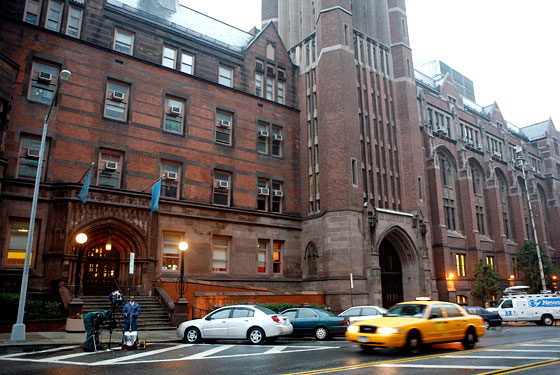 As we recently learned from Bill O’Reilly, whose comments about black patrons at Sylvia’s prompted a week’s worth of outrage, and Cindi Leive, the editor-in-chief of Glamour, which had its own controversy after an editor at the magazine told a group of lawyers that “political” hairstyles like Afros and dreadlocks were a definite “Don’t,” these incidents are not just a reminder that racism didn’t stop with Brown v. the Board of Education. They can also prompt a lot of useful discussion. Which is what’s going on over at Columbia University, where yesterday morning, a noose was found hanging from the office door of African-American professor Madonna Constantine. The reaction of the student body to the incident, at least according to the Bwog, the blog of Columbia’s Blue and White newspaper, seems to be ranging from surprise (“Shut the fuck up! Holy shit!”) to world-weariness (“Who is Columbia’s p.r. guy? And is he just curled up in a corner sucking his thumb at this point? I mean, the shit-storm controversies just keep coming”).

As one student astutely pointed out: “Nobody likes this kind of shit except A. racists and B. the various groups here that love these kinds of controversies.” Some on the Bwog blamed Iranian president Ahmadjinedad for the incident. Others pointed to student groups like C.U.M.B.(Uh, the Columbia University Marching Band. Really.) and F.I.R.E (the Foundation for Individual Rights in Education). But others pooh-poohed these notions. “No real Columbia student would have the balls to do this,” said one. Right. Because that’s what you have to have to hang a noose on someone’s door: Balls. One student suggested the university “take a survey of all the local hangmen and see which one is missing a noose.” “It’s got to be someone she knows,” another student mused. And then the discussion went to the next level. “Doors that belong to black people look exactly like doors that belong to white people,” one student pointed out, prompting the response: “If you’re not racist, you are certainly a complete fucktard.” But there was on student whose feelings seemed to capture those of the student body the best: “It is just really sad that this shit still goes on.” Totally, dude.

Related: The Age of Apoplexy[NYM]