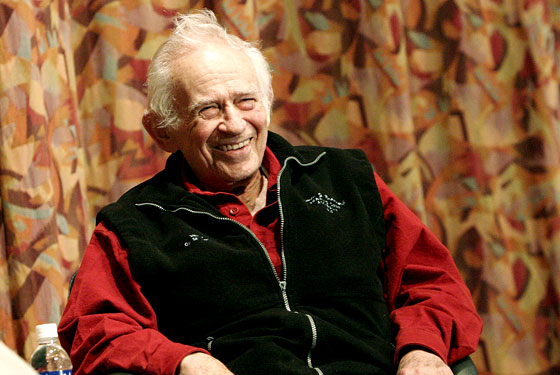 Literary icon Norman Mailer is in the hospital again, battling respiratory problems, reports the Post. His children are holding “daily vigils” by his bedside at Mount Sinai, and his ex-wife Carol Mailer says “he’s not in very good shape.” Mailer was hospitalized over Labor Day for asthma-related problems but insisted upon being let out to go to his daughter Maggie’s wedding. Later, his lung collapsed, and he had to return to medical care. Though a relative assured the paper that, “Everything’s fine, he’s recovering,” we have to wonder how much Mailer is thinking of his God theory these days. Particularly, when faced with his own mortality, how strongly he believes that “our childlike notion of Heaven has to be relinquished,” as he recently told New York. The 84-year-old is instead a believer in reincarnation. “Why sit around forever in an elevated version of Club Med?” he asked. Um, because that sounds awesome? Man, the guy’s got lung problems and is over half a century older than we are, and he’s still got more enthusiasm. Yipes.

Norman Mailer Back in Hospital [NYP]
Related: The Rise of Mailerism [NYM]

THE FEED
12:49 a.m.
new york city
new york city
Random Stabbing of Asian NYC Man Results in Hate Crime Charges
By Chas Danner
The attack happened just days after city officials vowed to do more to protect Asian New Yorkers from racial targeting amid the pandemic.
2/26/2021
pivot
pivot
Why Is GameStop’s Stock Price Soaring Again?
By Intelligencer Staff
A frenzy driven by people who revel in market volatility.
2/26/2021
the power grid
the power grid
Amid the Scandals, Cuomo’s Enemies Are Ready to Unleash a Decade of Resentment
By David Freedlander
“He is the most damaged he has ever been,” said one senior capitol aide.

2/26/2021
$15 minimum wage
$15 minimum wage
Democrats Can Still Get a $15 Minimum Wage Into the COVID-Relief Bill
By Eric Levitz
There are plenty of ways for Democrats to get a $15 minimum wage through the Senate. There just aren’t 50 Senate Democrats willing to do so.
2/26/2021
education
education
New York City Schools Chancellor Richard Carranza Resigns
By Nia Prater
Carranza, who clashed with de Blasio on how to desegregate schools, will be succeeded by Meisha Porter, the first Black woman to run the system.
2/26/2021
the national interest
the national interest
How Trumpism Has Become a Cult of Losing
By Jonathan Chait
Why do Republicans still love a loser whose entire appeal was that he’s a “winner”?
2/26/2021
coronavirus
coronavirus
I Was a COVID-Vaccine-Site Bouncer
By Irin Carmon
The city tried to build a COVID volunteer corps. The system wasn’t prepared for the demand.
2/26/2021
intelligencer chats
intelligencer chats
The Political Costs of Ted Cruz’s Cancún Vacation
By Gabriel Debenedetti and Benjamin Hart
This scandal may do lasting damage to the Texas senator — but he’s got plenty of time to ride it out.
2/26/2021
conservatism
conservatism
The $15 Minimum-Wage Debate Clarifies the Partisan Economic Divide
By Eric Levitz
Republican “populists” oppose a $15 minimum wage because they stand for predatory small-business owners, not working people.
2/26/2021
politics
politics
The New CPAC Makes the Old CPAC Look Like the #Resistance
By Ben Jacobs
Trump critics are out, election truthers are in.
2/26/2021

Single dose of Pfizer vaccine offers robust protection for those who have had Covid-19, studies find.
—New York Times
2/26/2021
pandemic
pandemic
Unions Aren’t the Obstacle to Reopening Schools
By Sarah Jones
Teachers can’t wish away the consequences of underfunding public education.
2/25/2021
biden administration
biden administration
Biden Approves U.S. Airstrikes on Iran-Backed Militias in Syria
By Matt Stieb
The Pentagon claims the airstrikes were in retaliation for a prior strike on U.S. forces, and were not intended to escalate hostilities with Iran.
2/25/2021
politics
politics
The House Has Passed the Equality Act
By Claire Lampen
The bill, which has Biden’s support, prohibits discrimination based on gender identity and sexual orientation.
2/25/2021
politics
politics
$15 Minimum Wage Is Dead for Now Thanks to One Unelected Official
By Ed Kilgore
Biden must decide whether to change the rules or change the subject.
2/25/2021
gop
gop
Mitch McConnell Would ‘Absolutely’ Support Trump If He Were the 2024 Nominee
By Matt Stieb
Once again, he backs the man who has physically mocked him, called on the party to replace him, and arguably cost him his Senate majority.
2/25/2021
politics
politics
Republican Senators Haven’t Represented a Majority of Voters Since 1996
By Ed Kilgore
The anti-majoritarian nature of the Senate has helped Republicans block progress for many years.
2/25/2021
politics
politics
De Blasio Calls for Probe Into Sexual Harassment Allegations Against Cuomo
By Nia Prater
The mayor called the allegations “disturbing” and joined a bipartisan group of New York lawmakers demanding a probe.
2/25/2021
neera tanden
neera tanden
Tanden’s Nomination Won’t Make or Break the Biden Presidency
By Ed Kilgore
Some Beltway pundits are inflating this story well beyond its significance.
2/25/2021
voting rights
voting rights
Republicans Return to Old Voter-Suppression Playbook
By Ed Kilgore
Trump shifted the focus to phony vote-by-mail fraud claims, but Republicans tried to limit all kinds of voting pre-2020 — and they’re at it again.
2/25/2021
coronavirus
coronavirus
Everything We Know About the Coronavirus Variant Spreading in New York City
By Matt Stieb and Paola Rosa-Aquino
Two new studies suggest that the variant B.1.526 detected in New York City could dampen the effectiveness of some vaccine candidates.
2/25/2021

Pfizer and BioNTech Studying Third Covid-19 Vaccine Dose to Fight New Strains
—Wall Street Journal
2/25/2021
the sports section
the sports section
Why Did Someone Pay $5 Million for a Baseball Card in 2021?
By Joe DeLessio
The pandemic isn’t the only reason the sports-card market has been booming lately.
2/25/2021
coronavirus vaccine
coronavirus vaccine
How to Sign Up for a COVID Vaccine in New York
By Matt Stieb
Two of the state’s largest vaccination centers opened this week at Medgar Evers College in Brooklyn and York College in Queens
2/24/2021
south dakota
south dakota
South Dakota Attorney General Reported Hitting a Deer But Fatally Struck a Man
By Matt Stieb
New details cast doubt on Jason Ravnsborg’s initial claim that he thought he hit a deer, not a person. He is now facing impeachment.