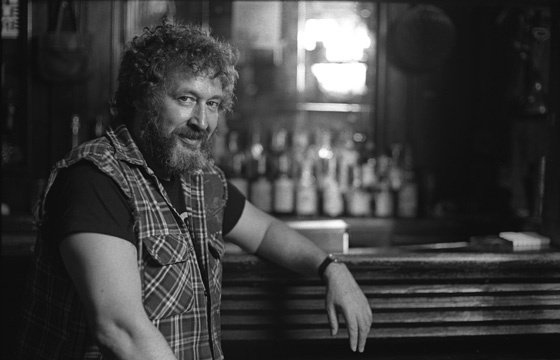 It’s hard to believe that the world’s most renowned rock club was started by someone who didn’t care for rock. But that was one of the things we learned at Hilly Kristal’s memorial service at the Bowery Ballroom last night, where Old Guarders like Patti Smith, Joan Jett, and Tommy Ramone remembered Kristal’s quirks: his lumberjack attire, his penchant for bluegrass and brandy-Frescas, and his distaste for loud music. “He was a unique person who appreciated unique talent and innovative acts,” said Ramone. “He knew which performers had something to offer.”

The aging iconoclasts also mourned the passing of CBGB and the Bowery itself, which, according to Tommy’s ex-manager Danny Fields has lately been dominated by “an incredible amount of ugly buildings and ugly people.” Of course, Kristal’s club was never winning any beauty contests: It was “a big, smelly, empty bar,” croaked Television founder Richard Hell, “where winos, barkers, and bikers and hillbillies drank.” But, everyone conceded, CBGB and its inhabitants had a lot more soul than the velvet-roped cocktail factories filled with drunk NYU students that are proliferating in the neighborhood now. At least it was loved; as was its owner. “The land and the king are one and the same,” said longtime doorman Brendan Rafferty. “You can’t talk about Hilly and not talk about CBGB … When [it] closed, I didn’t just lose a job; I lost a home. And when Hilly died, I lost a father.” The sentiment was echoed by all the rockers there: Hilly Kristal was the beneficent patriarch of their cultural revolution. He just didn’t like the music is all. —Alex Littlefield

THE FEED
3/6/2021
covid-19 stimulus
covid-19 stimulus
The COVID-19 Stimulus Bill Can Help Biden Transform Politics
By Ed Kilgore
Some white working-class voters just want to see that government works for them, too. The relief bill could bring them back to the Democratic Party.
3/6/2021
politics
politics
Senate Passes $1.9 Trillion COVID-Relief Package: Live Updates
By Chas Danner
After more than 24 hours of delays, the Senate finally passed the American Rescue Plan on Saturday afternoon in a 50-49 vote.
3/6/2021
gridlock
gridlock
Today’s Gridlock Is Like a 19th-Century Nightmare
By Ed Kilgore
We’re experiencing the instability and close partisan competition of the Gilded Age along with the big differences and fury of the 1850s.

3/6/2021
the national interest
the national interest
How Never Trumpers Are Becoming Pro-Democracy Republicans
By Jonathan Chait
Republicans who left the party over Trump are staying away over authoritarianism.
3/5/2021
covid-19 stimulus
covid-19 stimulus
What Will Parents Get From the COVID-19 Relief Bill?
By Ed Kilgore
Between a third stimulus check and enhanced child tax credits, low-to-moderate-income parents would get a lot of help — though it could be temporary.
3/5/2021
the national interest
the national interest
Neanderthals Were Smarter Than Anti-Mask Republicans
By Jonathan Chait
The right is angry, but Biden was probably too kind to Greg Abbott.
3/5/2021
culture war
culture war
The Right Would Rather Debate Kids’ Books Than Biden’s Bills
By Eric Levitz
As Democrats ready a major expansion of Obamacare and child welfare, GOP lawmakers are whining about Dr. Seuss and Mr. Potato Head.
3/5/2021
vaccines
vaccines
Vaccine Hesitancy Is Falling, According to a New Poll
By Paola Rosa-Aquino
The number of people who say they want a shot (or have already gotten one) has jumped way up.
3/5/2021
covid-19 stimulus
covid-19 stimulus
Senate Likely to Vote on COVID-19 Stimulus Package This Weekend
By Ed Kilgore
Democrats are already accepting changes in the bill to preempt Republican amendments, and Sanders’s minimum wage bid has already been defeated.
3/5/2021
capitol riot
capitol riot
Trump State Department Appointee Arrested Over Capitol Riot
By Nia Prater
The FBI said Federico Klein stormed the Capitol and assaulted an officer. He’s the first Trump administration member charged in the insurrection.
3/5/2021
pivot
pivot
Are Movie Theaters Completely Screwed?
By Intelligencer Staff
For an already troubled industry that has been battered by the pandemic, there may be a narrow path to survival.
3/5/2021
politics
politics
Democrats Shouldn’t Count On a ‘Morning In America Midterm’
By Ed Kilgore
Midterms are different from presidential elections, and 1984 isn’t 2022.
3/5/2021

What they did could be a violation of House rules.
—@kylegriffin1
3/4/2021
death penalty
death penalty
South Carolina Understands What the Death Penalty Is For
By Sarah Jones
State senators want to execute people by firing squad. That would be as brutal as the death penalty itself.
3/4/2021
revenge
revenge
Trump’s Plan to Oust Murkowski May be Foiled by Long Flight
By Benjamin Hart
This is when a Twitter account would really come in handy.
3/4/2021
politics
politics
Louis DeJoy Is Killing It
By Casey Taylor
While Biden dithers, Trump’s minion wrecks the postal service.
3/4/2021
scandals
scandals
Everyone Who Has Called for Governor Cuomo to Resign
By Nia Prater
As the scandal over COVID policies is compounded by harassment allegations, a growing number of elected officials say he must resign or be impeached.