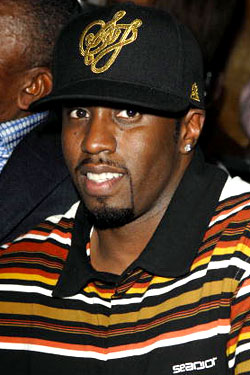 Sean “P. Diddy” Combs punched a dude this weekend at Kiosk, presumably because he doesn’t have ladyparts to flash and this is his way of getting attention. He’s expected to “turn himself in” today, meaning we guess he’s going to walk into the police station and slap a wad of cash on the counter. We don’t know much about the guy he punched, except that he is called Steven Acevedo, he is somehow involved with fashion, and according to the Post, which wrote about the incident as though it were a scene from West Side Story the two were “love rivals.” Other than a minor mention linking him with dubiously employed Steve Aoki, he’s pretty unGoogleable, which is odd for a fashion guy. Which means getting clocked by P. Diddy is probably the best thing that ever happened to him. If he’s not in talks for his own reality show right now, he’s probably auctioning off his face on eBay. Because isn’t this just the land of opportunity?

Diddy to Turn Self In on Club Punch Rap [NYDN]

THE FEED
21 mins ago
facebook
facebook
What Is Being Leaked in the Facebook Papers?
By Chas Danner
A guide to the newly reported revelations from a trove of internal company documents shared by a company whistleblower.
11:23 a.m.
the facebook papers
the facebook papers
The Facebook Leaks Have Caught the FTC’s Attention
By Benjamin Hart
The agency is reportedly investigating whether leaked files prove Mark Zuckerberg & Co. misled consumers.
10:00 a.m.
covid-19
covid-19
Where Are All the At-Home COVID Tests?
By Margaret Hartmann
Here’s why rapid antigen tests are still scarce weeks after Biden promised to boost at-home testing, and when they’ll finally be widely available.

9:00 a.m.
the economy
the economy
Bidenomics Is Working
By Eric Levitz
Even though voters think otherwise.
8:00 a.m.
encounter
encounter
Lina Khan Isn’t Worried About Going Too Far
By Nancy Scola
The FTC’s very young new boss thinks corporations such as Facebook are abusing their power. To fight them, she’s consolidating some clout of her own.
7:00 a.m.
the facebook papers
the facebook papers
‘The Problem Is Him’
By James D. Walsh
Kara Swisher on Mark Zuckerberg’s crisis and ours.
10/26/2021
nyc mayoral race
nyc mayoral race
Key Moments From the Second New York City Mayoral Debate
By Nia Prater
Sliwa yelled at Adams, Adams ignored Sliwa, and both insulted de Blasio in the final contest of the 2021 mayoral race.
10/26/2021
brazil
brazil
Bolsonaro Accused of Crimes Against Humanity Over COVID Response
By Matt Stieb
A report conducted by a Brazilian Senate panel found that Bolsonaro’s pandemic response was criminally negligent.
10/26/2021
coronavirus vaccines
coronavirus vaccines
The U.S. Is One Step Closer to Pfizer Vaccines for Kids
By Matt Stieb
An FDA advisory panel approved a lower dose of the Pfizer candidate for kids ages 5 to 11.
10/26/2021
capitol riot
capitol riot
Marjorie Taylor Greene and the Right’s Creeping Embrace of Revolution
By Ed Kilgore
It’s easy to dismiss her as making yet another extremist statement likening January 6 to 1776. She is far from alone, though.
10/26/2021
pivot
pivot
Why Zuckerberg’s Days As CEO May Be Numbered
By Intelligencer Staff
As damning information about the company keeps trickling out, something has to give.
10/26/2021
the national interest
the national interest
How the Right-Wing Supreme Court Can Save Biden’s Economic Plan
By Jonathan Chait
Conservative judicial activism to the rescue!
10/26/2021
kyrie irving
kyrie irving
The Nets Really Don’t Want This
By Zak Cheney-Rice
The team’s best-laid plans are no match for one stubborn anti-vaxxer.
10/26/2021
politics
politics
The NYPD is the Latest Police Force to Fight Vaccine Mandates
By Nia Prater
The city’s biggest police union is suing.
10/26/2021
games
games
The Aggrieved World Series
By Will Leitch
The Astros and Braves both have fan bases defined by resentment — a perfect fit for 2021.
10/26/2021
the facebook papers
the facebook papers
No Amount of Whistleblowing Can Fix Facebook
By Jacob Silverman
We know the problem with Facebook. The real question is what to do about it.
10/26/2021
the national interest
the national interest
Glenn Youngkin’s Closing Message: Ban Toni Morrison From Schools
By Jonathan Chait
Virginia Republican wants the angriest parents to have a veto on school curriculum.
10/26/2021
republicans
republicans
A Short History of Conservative Trolling
By Rick Perlstein
On the laughing emptiness at the center of the Republican Party.
10/26/2021
business
business
The Soft Sell of Hims
By Jesse Barron
Can the health-care brand leverage young men’s anxiety over erections and hair loss into a multibillion-dollar empire?
10/26/2021
the national interest
the national interest
Republican Leaders Could Still Stop Trump. They Just Don’t Want To.
By Jonathan Chait
Trump wants to erode democracy. They just want to win.
10/25/2021
the facebook papers
the facebook papers
Mark Zuckerberg Wants to Pivot Facebook Back to the Youngs
By Matt Stieb
Zuck called the Facebook Papers “a false picture of our company” and said the social-media giant was “retooling” to attract Gen Z.
10/25/2021
2022 midterms
2022 midterms
National Republicans Are All In on Herschel Walker
By Ed Kilgore
Despite some early misgivings, the GOP’s national might is lining up to support Trump’s candidate in the crucial 2022 Senate race in Georgia.
10/25/2021
elections of 2021
elections of 2021
New Jersey Governor’s Race Is Getting Interesting and Maybe Even Competitive
By Ed Kilgore
The race has definitely tightened, with Republican Jack Ciattarelli challenging Democratic incumbent Phil Murphy while giving Trump a wide berth.
10/25/2021
just asking questions
just asking questions
Harvard Has Too Much Money to Have So Few Students
By James D. Walsh
Scott Galloway on gargantuan endowments and why elite universities’ obsession with exclusivity and prestige is unethical.
10/25/2021
covid-19
covid-19
Cash Lotteries Didn’t Do Much to Boost Vaccination Rates, Study Finds
By Nia Prater
A study in the JAMA Health Forum said a link between vaxx rates and lottery announcements was “statistically indistinguishable from zero.”