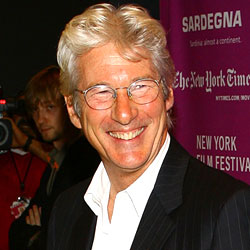 Richard Gere may buy the penthouse in Julian Schnabel’s West Village building, if he can sell his Sullivan Street townhouse for $12 million first. Henry Kissinger, Michael Eisner, and Barry Diller were among the power players who ate at Michael’s for lunch yesterday. Some designers are refusing to use the Earth Pledge’s ecofriendly “Sea Leather” because it’s actually made out of dead fish skin. Ivana Trump’s new engagement ring, from daughter Ivanka’s jewelry line, costs $250,000. Anderson Cooper told Conan that he has a “fatty deposit” under his eye that is visible in high definition. NBC refused to run a Larry Craig–inspired political commercial, though CNN picked it up. (Perhaps it had something to do with Matt Lauer’s interview with the disgraced senator?)

Ellen DeGeneres and her lawyer are involved with an animal-adoption agency over a dog Ellen adopted but then illegally gave to her hairdresser. Francis Ford Coppola thinks that Al Pacino, Robert De Niro, and Jack Nicholson are all lazy and too content with themselves. Lindsay Lohan’s new boyfriend, Riley Giles, actually has a fiancée, though he stopped calling her after he and Lohan started dating. Halloween costume store Abracadabra won’t sell an O.J. Simpson mask but will sell one of Bill Clinton in drag as the First Lady. Gabrielle Union says she has a girl crush on Eva Mendes. Lance Bass claims that Britney Spears stopped talking to him after he told her that he was gay. New York philanthropist Jon Tisch quietly wed Lizzie Rudnick at the Four Seasons. Harold Ford Jr. celebrated his engagement to Emily Threlkeld with seven others at ‘21.’ U.S. Doctors for Africa are honoring Russell Simmons with a fête at Cipriani Wall Street. Sir Ben Kingsley thinks that The Wackness co-star Mary-Kate Olsen is “a genius.” Bobby Cannavale and Annabella Sciorra may have split. Cindy Adams says that in her day, cabs cost $0.25 not $2.50.