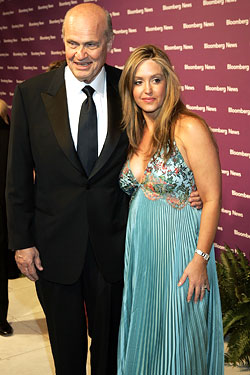 Though no one has yet identified the would-be trophy wife who wrote the Craigslist post looking for tips on finding a husband who makes $500,000 a year, “because $250,000 won’t get me to Central Park West,” the author of the awesome rebuttal to the post, which made e-mail rounds last week and which we printed here on Thursday, was believed to be one Rob Campbell, an investment banker at J.P. Morgan Chase. This seemed like a safe assumption — after all, the e-mail was signed:

By late last week, Campbell was being hailed across the Internet as a sort of American Folk Hero, giving a voice to exploited, um, rich single dudes across the land. But today’s Times article on the kerfluffle seems to indicate they don’t exactly feel that way about him at the office.

A voice mail from the paper netted a call from J.P. Morgan’s media-relations department, who denied Campbell was the author of the email — probably because “You’re 25 now and will likely stay pretty hot for the next 5 years, but less so each year. Then the fade begins in earnest. By 35 stick a fork in you!” does not represent the image the bank wants to convey —. They added that his signature was on it only because he was guilty of forwarding it to friends. The Times then apparently took pity, and concluded that Campbell was probably just an “accidental sexist” rather than a purposeful one, which is probably why they didn’t name Rob in the story. Oops, but we guess we just did. Sorry, dude!

Previously: “In Economic Terms, You Are A Depreciating Asset”[NYM]

THE FEED
9:55 a.m.
the system
the system
Tyre Nichols and the End of Police Reform
By Zak Cheney-Rice
His death is evidence that cosmetic change can’t excise the rot of American law enforcement.
9:00 a.m.
fear vs. fun
fear vs. fun
Phone, Keys, Wallet, Test Strip
By Kyra Breslin
Checking for fentanyl is becoming a necessary ritual of nightlife.
8:14 a.m.
what we know
what we know
Videos Show Police Brutally Beating Tyre Nichols: Updates
By Chas Danner
In the horrifying footage released Friday by Memphis authorities, officers can be seen delivering numerous blows to Nichols’s head.