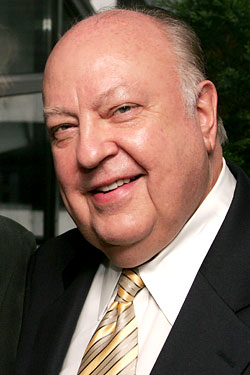 When we saw the Wall Street Journal interview today with Fox Business Network overlord Roger Ailes, we were excited to learn more about the soon-to-debut channel. So when we began to flip through, we were less than delighted that all we read about was … CNBC. Ailes began his interview with the WSJ’s Rebecca Dana by saying, “I think the CNBC Fox Business Network so-called rivalry could be overblown.” And then he went on to rant about his former network for much of the rest of the interview. “They’ve embraced capitalism suddenly,” he chortles. “They’ve put on shows: what? Capitalism’s good! What a plan.” Oh, har. If this is the kind of muckraking journalism we can expect from FBN, we’ll definitely tune in! After the jump, more on what FBN’s Roger Ailes has to say about — what else? — Another network.

• “I’ve made them extremely uncomfortable because they used to just be uncomfortable with corporations and profits because they always only wanted to embrace capitalism on the day they negotiated their own contracts, and they’ve been forced now to see that it’s probably a good idea over all and it creates a lot of charity and a lot of jobs for people and is a good thing. So, if nothing else, it’s dragged some of them kicking and screaming toward reality.”
• “They probably don’t reflect the business community in terms of their own economic and political views in many cases. Not that they should, but they should be able to report on it accurately and I think that they’ve you know, look, they got burned. They rode the bubble up. They flogged the bubble. They got burned.
• “I mean, there are some very good individual reporters, anchors and talent at CNBC. I found that when I went there. Everybody thought I would go in there and fire everybody and clean house. It turned out there were a lot of good people there. They lacked a mission and a focus and leadership. Oftentimes that’s the case. I think they’ve improved. They’re better. They’ve certainly had two years to figure out what we might do.”
• “They’ve had the Wall Street Journal for seven, eight years. So I’m expecting them to come out of the gate the day we launch with some brilliant programming based on the Wall Street Journal. They’ve been holding it in reserve I think and they’re gonna flood me with a tsunami of brilliant ideas and programming on Day One.”
• “They have a tremendous advantage. They’re in 90 million homes. They have a 17 year head start. I put them on track 12 years ago. They’ve got GE. They’ve got all the money they need. They’ve got a brand new building. And we’ve announced when we’re gonna come with our programming in our 30 million little pathetic homes. If they can’t kill us in the crib now, it’s only gonna get worse for them day to day.”
• “We’re not particularly targeting CNBC. CNBC does a narrow kind of programming. Unless they do what they could do which is jump us with a whole lot of Wall Street Journal stuff, programming. If they do that, the good stuff will eventually become mine. Cause they’re my R and D department.”
• “Look, I’m the one who put Maria Bartiromo on the air. She’s a fine talent. This new woman that they’re overusing because she’s on now 15 hours a day, Erin Burnett, is a good talent. But she’s gonna age. She’ll only last another year the way they’re working her.”
• “If you study history, the victories did not always go to the people with the great resources. Stonewall Jackson seemed to be undermanned in every campaign and won. McClelland had plenty of resources in every fight and lost.”
• “It’s like putting one football team on the field. You know what? They’ll win. They can run up and down the field all day, score 100 touchdowns in four quarters. As soon as you put somebody out there to tackle them and run the ball themselves, life changes. So we’ll see how they adapt.”
• “You know, the Germans had the high ground at Normandy and you know what? Our guys did alright. I just figure, you know, the fight will begin. I feel confident our folks are ready for it.”

You know? We’re not even really sure what he’s talking about by the end there.