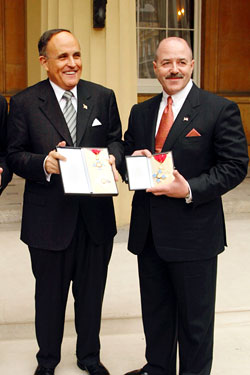 Rudy Giuliani has hired a legal bulldog to keep him protected from any involvement in the federal case against his former ally Bernard Kerik, reports the Post. The lawyer, a partner at his firm Giuliani & Bracewell, is named Marc Mukasey — yeah, that’s right: the dapper young son of soon-to-be U.S. Attorney General Michael Mukasey. The younger Mukasey is charged with the task of making sure that Kerik’s potential bribery and tax-fraud indictments don’t wound the Giuliani campaign. So far, Mukasey has earned his keep by blocking Kerik defense attorneys from talking to former Giuliani aides – basically hamstringing the former NYPD chief’s efforts to defend himself. This is an aggressive move for Giuliani, who the paper reports in the past has remained supportive of Kerik even though Kerik has cost him political capital. The point of hiring Mukasey was to make it look like Giuliani didn’t know anything about Kerik’s alleged activities, but we just took a look at Mukasey’s page on his firm Website.

Yeah, after you hired this guy, nobody’s going to think you have anything to hide, Rudy.