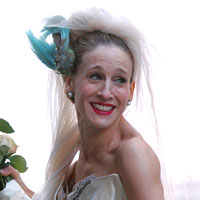 James Mackenroth, a contestant on the upcoming season of Project Runway, may have been voted off in part because of a staph infection made worse by his HIV. Sarah Jessica Parker and Jennifer Hudson filmed a scene for the Sex and the City movie together at the Carlyle Hotel, and SJP gave JHud a CD! A-Rod and Martha Stewart posed for photos together at Nobu 57. Contrary to a previous “Page Six” report, attendees at the Rolling Stone reunion in San Francisco actually did drink the Champagne that Jann Wenner sent. James Gandolfini pulled out of appearing at a John McCain fund-raiser in New York because of “scheduling conflicts.” Anderson Cooper thinks Britney Spears is underreported on.

As many as 40 girls may claim that Jeffrey Epstein had solicited sex from them, though his lawyers feel that some of the lawsuits may be frivolous. Rolling Stone Ron Wood claims he was freebasing so much cocaine that Keith Richards once pulled a derringer on him to get him to stop. Kevin Federline, in D.C. filming guest spots on One Tree Hill, is smoking weed on set and leaving $600 tips at bars. A short film set to be released in November is an adaptation of Gonzo journalist Charles LeDuff’s story of editorial incompetency at the New York Times. Clarence Thomas’s benchmates on the Supreme Court are not happy with the success of his autobiography. Fashion photog Steven Klein was heard grumbling about working with Tom Cruise for W. John Flanagan’s Southampton Tavern is on the market for $4.9 million. Blender named Sting the worst lyricist of all time. A floozy says that Kid Rock’s manhood is on par with Tommy Lee’s. Helen Mirren says she’d love to have her legs lipo-ed, but she’s too afraid. Mel Gibson is buying lots of land in Costa Rica.