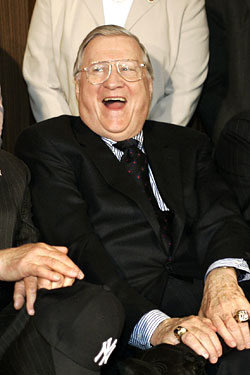 So Joe Torre still has his job so far, and as we try to fathom what could possibly be going on in George Steinbrenner’s gargantuan head, Editor & Publisher’s interview with Ian O’Connor sheds a little light. O’Connor is the sportswriter for the Bergen Record who kept calling Steinbrenner at his New York home last weekend until the Yankees owner picked up and talked to him about the team. That’s when Steinbrenner dropped his bombshell about Torre, saying, “His job is on the line … I think we’re paying him a lot of money. He’s the highest-paid manager in baseball, so I don’t think we’d take him back if we don’t win this series.” As Steinbrenner has avoided follow-up interviews with reporters, some have speculated about his health and whether he was thinking clearly when he gave the interview. But O’Connor says he’s confident the owner knew what he was saying.

“I told myself if he does not seem lucid and clear-minded, or confused in any way, I was not going to write a story,” O’Connor explained. “He seemed very lucid and in a lot of ways the George Steinbrenner I interviewed in previous calls.” To make sure he was serious, the reporter reminded Steinbrenner of all of Torre’s championship successes — but the boss remained tough. O’Connor even told E&P that he’s a Torre supporter but felt he had to publish the bad news anyway. “I am a journalist, and if George Steinbrenner is going to say these things,” O’Connor said ruefully, “I have to be a journalist and reporter and report it.” The scoop by the sportswriter, who has previously written for the Daily News and USA Today, raised the profile of the Record in recent weeks. “I got lucky,” O’Connor said. “It is a good message to always make that extra call.” Aw, reporting. It’s so adorable when it’s earnest.