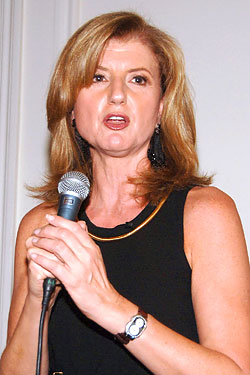 But can she hold one and a glass of cheap
Champagne?Photo: Getty Images

After 150 years of really great ideas, The Atlantic has come up with one that makes us uncomfortable. To celebrate their anniversary milestone, reports WWD, they’re going to throw a big party with stars you’d expect, like Tom Wolfe, Arianna Huffington, and Moby (er…), but they’re going to put the whole thing onstage. The audience will be whoever wants to stop by and watch journalists and luminaries get together and schmooze. “It’s the cocktail party as performance art,” said Atlantic Media consumer media president Justin Smith. First of all, didn’t Gawker already have this idea when they had a live feed from their book party? At least at their version, people were doing drugs and trying to hook up. And second, can The Atlantic possibly believe that people, even readers, would want to watch journalists frolicking in their natural habitat*? This is not a good sign. If you’ve ever wondered whether Andrew Sullivan or Matthew Yglesias is better over canapés, you are truly, truly demented. Or, you know, a blogger. Are we really at the point that people are throwing parties solely to pander to us? Somehow we imagined this would feel more satisfying.

*Open bars on someone else’s dime, naturally.
Life of the Party [WWD]

+Comments Leave a Comment
‘The Atlantic’ Brings the Media Party to Its Gruesome, Inevitable Conclusion