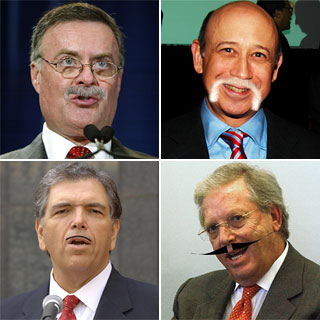 
With the sub-prime debacle, the barons of Wall Street have learned a lesson about risk. But there’s a chancy new fad on the horizon they might not be able to resist. Aaron Perlut, the co-founder of the American Mustache Institute, issued a warning in the morning’s Wall Street Journal:


“You’re definitely out on a limb when you grow a mustache, especially a flamboyant one, and if you do, you always run the risk that people will think you’re going too far.”

That’s right, folks! Tomorrow begins Movember, a monthlong Australian contest which encourages businessmen grow mustaches, or “mos,” in order to raise funds for prostate cancer. This is the first year that the contest has come to the U.S., but it seems that New York’s finance guys might be a little too uptight to, ahem, “sport a mo.” The Journal points out that none of the chief executive officers at the top-ten Fortune 500 companies have mustaches — although we imagined what some of them would look like if they did, above — “and for young professionals seeking to follow in their footsteps, growing one may seem like a step in the wrong direction.” Take the experience of Christopher Doyle, a 26-year-old audit assistant at Deloitte & Touche, who was given a “gentle reminder” to shave after only two days of work. Well, that’s Wall Street for you. Clean-cut at the office, drag and nipple clamps at home.

+Comments Leave a Comment
Things Get Hairy on Wall Street