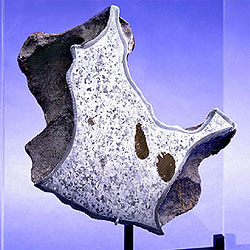 Pull your monitor close, dear readers, and let Auntie Intel tell you a story. Long ago, back in the Second Gilded Age, many people were very, very wealthy. Parents shelled out $10 million for bat mitzvahs and $2,500 for Hannah Montana tickets, and once, someone even bought a grilled cheese on eBay for $28,000 because he thought it looked a little like the Virgin Mary. And so people had high hopes for the 30-pound chunk of rock that was a section of the world’s most famous meteorite, the Willamette meteorite. It just looked like a rock, but it had fallen from the sky in 1902, killing a cow in the process. This made the rock very valuable indeed, and people came from far and wide to see it. There was interest from people like Stephen Spielberg! And Nicholas Cage! And Yo-Yo Ma! It was expected, people said, to fetch a value of $1.3 million. And so, on the day of the auction there was much excitement. The bidding went up to $300,000! But then it stopped. No one bought the rock. People didn’t know it at the time — Britney Spears was acting up again, and who could pay attention? — but the incident, and the image of the rock, lonely and unpurchased on its stand, would in time became the symbol of the End of the Second Gilded Age.

+Comments Leave a Comment
This Is How the End Begins