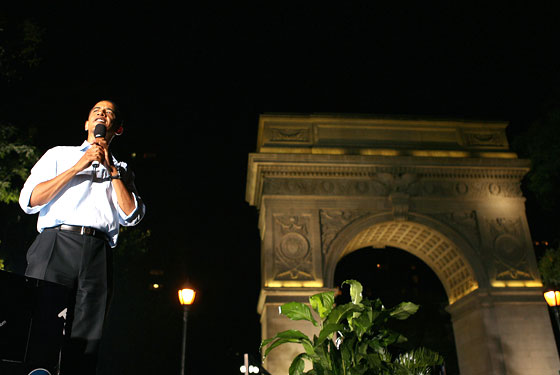 Obama returns to his onetime home city for a rally earlier this year in Washington Square Park.Photo: AFP/Getty Images

Today, the New York Times set out to blow open the little-discussed enigma that is Barack Obama’s three-year stint of living in New York. He only mentions the period briefly in his memoir, and a campaign spokesman says “he doesn’t remember the names of a lot of people in his life” from that time. So Times reporter Janny Scott is on the case to find out what really went on while he was here as a Columbia student and organizer, and what he’s been hiding. And the answer is … nothing! Sure, he remembers some things wrong or exaggerates them (he says he had a secretary during one job, and he didn’t; he overstated the size of a company where he worked), but mostly it just seems like his time here was, well, unremarkable. Kind of like what New York discovered when we looked into his Harvard Law career. In both cases he claims he was active in black student and political organizations, but fellow students don’t always remember him. Can it be that when he was younger, the Democratic miracle boy just wasn’t that special? That while Hillary Clinton was making magazine covers and nationally noted speeches, Barack Obama was just … normal? We won’t believe it! Candidates can’t be just like us — because we know ourselves pretty well, and people like that have no business running for president.