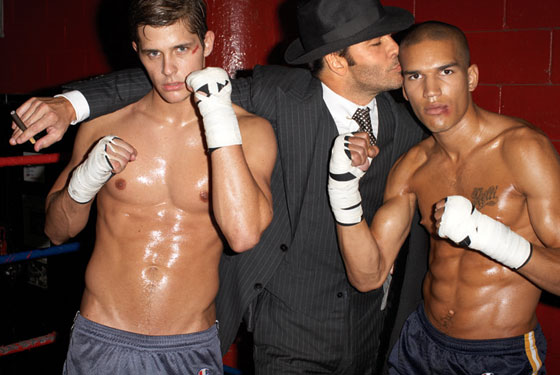 Ford, uncharacteristically putting several layers of clothing between us and his chest hair.Photo: Terry Richardson for Out

We’ve been seeing a lot of designer Tom Ford lately, what with his aggressively sweaty, chest-bearing perfume ads. But apparently for Tom, that wasn’t enough exposure. The 45-year-old strips down for a new boxing-themed photo shoot in the November issue of Out magazine and jumps in the shower with two burly boy models. (The above is a “before” shot.) Ford said he made sure to compliment his fellow models’ natural endowments in the shower but assured the mag that it didn’t make the pair uncomfortable. “They sense from me that I’m not going to give one of them a blow job,” he said. “I just don’t do that.” After the jump, much more tan line than you’re used to seeing on a Monday morning in October.