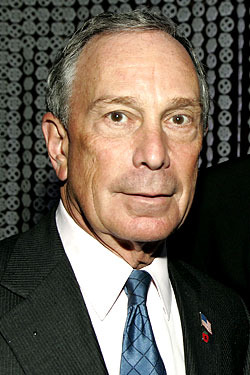 This weekend’s epic Newsweek story about Mayor Bloomberg reveals how closely and specifically Hizzoner and his aides (Kevin Sheekey in particular) have been considering a presidential bid. Sheekey has thought about the amount of money it would cost ($1 billion), the strategic advantages Bloomberg would have (nominees from both parties are sure to have racked up high negatives by next year), and the timing that would make it perfect (after the March 5 primary, when both parties’ candidates would be finally set in stone). He even has thoughts of how to tackle the Electoral College in the case of a close race.


The scenario that we see now, and that Sheekey seems to envisage, is a race between Rudy and Hillary, both of whom have deep weaknesses. Barring an upsurge by Romney, who is doing quite well in both Iowa and New Hampshire in the polls, Bloomberg would enter the race as the only candidate without deep war wounds. All of this information, culled carefully by Newsweek’s editor-in-chief Jon Meacham, should put to rest anyone’s doubts that Bloomberg is taking the possibility of a run extremely seriously. Will his candidacy hurt Rudy or Hillary most? (Newsweek calls that question “political porn.”) We sure as hell don’t know. But our current mayor’s presence will put new scrutiny on the verdict New Yorkers have given Giuliani. In which case, Rudy, all that shit you’ve been talking? It’s gonna turn around and bite you right in the ass.

The Revolutionary[Newsweek]
Earlier: At Last, Clarity on Bloomberg’s Presidential Plans

+Comments Leave a Comment
Election 2008: And the Winner is… New York?