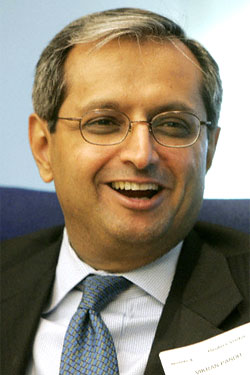 Some finance pundits may be giving newly installed Citigroup CEO Vikram Pandit a hard time, but there’s one person who knows he can get the job done: his dad. “I am not apprehensive about his abilities,” Shankar Pandit, 84, told the Times of India last night. “I am confident he will do a very good job.” In his interview with the Times, Shankar, the former director of a pharmaceuticals company, talked about getting the phone call from Vikram about his promotion (“He told me in a calm but happy voice that everything had gone well”) and what Pandit was like growing up (“He was a brilliant boy. In school, he always stood first in his class”) and gave some insight into the man Vikram is now.

He is a very simple person at heart. He likes reading and reads on all sorts of topics; he even reads up a cookery book! He is a very good photographer and enjoys being with family. He derives pleasures from simple things in life, not playing golf etc.


Again with the golf! Apparently, during the months following CEO Chuck Prince’s departure from Citi, Pandit discussed the possibility that he might get the Citigroup job with his father. Like an Indian Fred McMurray, his dad told him that although he hoped he would, but he would still be proud of him if he didn’t. “I told him he was only 50 years old and had enough time ahead of him to prove his worth,” he said. Aw. Even Wall Street titans are just little kids to someone.

Vikram Has To Put In A Lot of Efforts, Says Dad [Times of India]
Earlier: Daily Intel’s Coverage of Vikram Pandit

THE FEED
7 mins ago
what we know
what we know
Hurricane Ian’s Death Toll Continues to Climb
By Intelligencer Staff
Rescue efforts are still underway in Florida, where inland flooding continues to hamper recovery efforts.
9:30 a.m.
just asking questions
just asking questions
The Surge That Could Save Democrats
By Nia Prater
Tom Bonier makes the case that women are registering to vote in a fury after Dobbs and have the potential to reshape the midterms.
9/30/2022
2022 midterms
2022 midterms
Midterm Candidates’ Skeletons Are Coming Out of the Closet
By Ed Kilgore
In close races, attacks based on “oppo research” can matter a lot at this stage of the campaign cycle.