Above is President Obama’s speech on Libya as interpreted through the magic of the word cloud. (The size of the words correspond to the frequency with which they were used.) So what does it show us about Obama’s priorities last night? You can see his emphasis on the multilateral nature of the effort in the words world, international, allies, and coalition. But people is the biggest word, due to the speech’s (and the war’s) humanitarian impetus. Notice which word isn’t there? War. (Also absent, thankfully, was kinetic military action.)

How is this word cloud different than other presidential “why we’re at war” speeches from recent history? How is it the same? Come. Let’s take a look.

Though Qaddafi, Libya, and Libyan were all prominent in Obama’s speech, in George W. Bush’s Iraq speech on March 19, 2003, the name of the country in question, and its leader, barely register. Saddam Hussein was mentioned only twice.

In Bush’s Afghanistan speech on October 7, 2001, one word in particular sticks out to us: patience. Not that he could have known, but considering that we’re still in Afghanistan over nine years later, it probably should have been about five times larger, in retrospect.

Bill Clinton, in his Kosovo speech on March 24, 1999, was even more focused than Obama on making it clear we were working with Europe, allies, and NATO.

When Clinton addressed air strikes against Iraq on December 16, 1998, there wasn’t much of a coalition to speak of (just the British), so Clinton spent most of his time on the justification part: Saddam and his weapons. 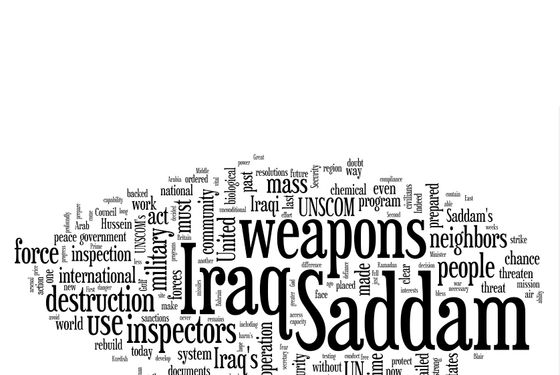 And justifying unilateral action was front and center once again in Clinton’s address about the missile strikes against targets in Sudan and Afghanistan on August 20, 1998, which featured the words terrorism, terrorist, and bin Laden.

THE FEED
7 mins ago
games
games
There Is No Fixing This
Tua Tagovailoa’s ugly injury is the latest reminder that no policy change can excise brutality from the NFL.
7 mins ago
the money game
the money game
Mohamed El-Erian on the Looming Recession — and What He’s Doing With His Money
By Jen Wieczner
“I don’t know how to convey it, but we came very close to a financial accident in the U.K,” says the markets guru.
10/4/2022
the sports section
the sports section
Aaron Judge Did It
By Joe DeLessio
The Yankees slugger hit his 62nd home run, breaking a still-sacred baseball mark. He’s also having a pretty good season in other categories.