The potential presidential candidate (supposedly), who increasingly seems to be on a mission to gradually destroy his own reputation, has doubts about President Obama’s birth. It’s okay though, because Trump is a “really smart guy”!

Speaking about the president, Trump — in line with “birthers” who question the president’s citizenship — said he, too, had his doubts that Obama was born in the U.S.

“Everybody that even gives a hint of being a birther  even a little bit of a hint, like, gee, you know, maybe, just maybe this much of a chance, they label them as an idiot. Let me tell you, I’m a really smart guy,” he said.

He explained the source of his doubt: “He grew up and nobody knew him. You know? When you interview people, if ever I got the nomination, if I ever decide to run, you may go back and interview people from my kindergarten. They’ll remember me. Nobody ever comes forward. Nobody knows who he his until later in his life. It’s very strange. The whole thing is very strange,” he added.

Trump actually said something similar, albeit not quite as birther-y, at CPAC in February:

The people that went to school with Obama never saw him? What does that even mean? Is Obama one of those invisible Kenyans now?

We guess what Trump is trying to say is that there are no classmates or teachers who can corroborate that Obama went to kindergarten in Hawaii. If only there was a class picture of Obama and all his kindergarten classmates … 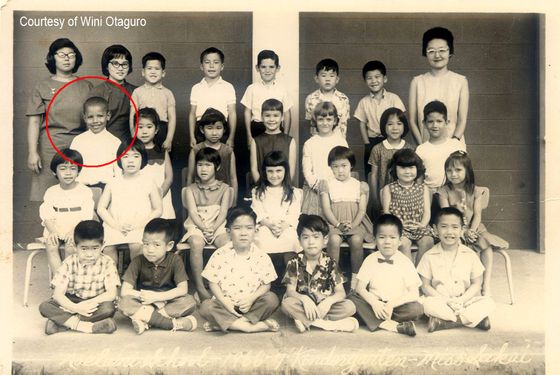 Or maybe some vivid recollections from Obama’s kindergarten teachers:

As student teachers, it never occurred to Aimee Yatsushiro or Katherine Nakamoto that a cute 5-year-old from their first teaching experience would become president one day, actually the first African-American president …

Yatsushiro, a retired teacher from Kahului, served as a student teacher from September to December 1966 at Noelani Elementary School on Oahu. Her supervising teacher was Kazuko Sakai, the primary educator for about 25 students in a kindergarten class that included a boy named Barack “Barry” Obama.

“He was a cute, likable, heavy build-child,” Yatsushiro recalled. “I could visualize Barry smiling, dressed in his long-sleeved, white shirt tucked into his brown Bermuda shorts, and wearing laced shoes.”

But if those things existed, a “really smart guy” like Trump probably would have been able to find them via a simple Google search, right?

Exclusive: Donald Trump Would Spend $600 Million of His Own Money On Presidential Bid [ABC News]

+Comments Leave a Comment
Donald Trump Is Kind of a Birther