Sean Parker, the Napster founder and 31-year-old Facebook billionaire, is known as a rootin’ tootin’ tech misfit. But in December, when he paid $20 million to buy 40 West 10th Street, one of the best townhouses in Greenwich Village that is now known as Bacchus House, he was a perfect fit as its latest owner. Over 178 years, it has passed through the hands of another man of great wealth, an earlier tech innovator, and two party animals.

Built as a two-story stable on a 92-foot-deep lot in 1833, when the city first started marching up Fifth Avenue, it was bought by James F. D. Lanier, an Indiana banker and railroad investor, when he moved to New York in 1851. The Laniers hobnobbed with Manhattan’s finest: Mortimers, Vanderbilts, Harrimans. 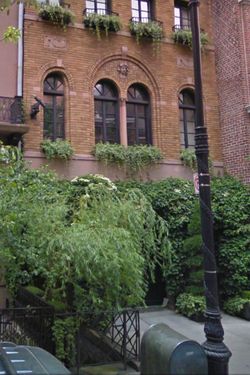 After a decade of ill health, Lanier died in summer 1881, and when his widow followed him seven years later, their son sold her stable for $25,000. The buyer, Howard Gibb, lived just around the corner on Fifth Avenue. He’d begun a career in dry goods as an overseas buyer for a firm founded by his father, and in 1887, at Parker’s age, took over a Brooklyn department store. Gibb was upwardly mobile — his first wife was related to a New York Central executive, and their daughter married a French count — wealthy and entitled. The same winter he bought Lanier’s stable, his chauffeur was arrested after his car, one of the first in the city, was caught speeding across the brand-new Brooklyn Bridge. Gibb was apoplectic when the police dragged them into court.

Gibb would die in Paris two months after buying Lanier’s stable. Six years later, his executors sold the structure for $22,500 to Charles Keck, a sculptor. Keck converted the stable into a lavish 24-foot-wide brick-fronted Beaux-Arts-style artist’s studio with 30-foot-high ceilings and huge skylights. Above that, he built two floors of living quarters, and he kept a garden on the roof. A former assistant to Augustus Saint-Gaudens, Keck is known for his monumental sculptures, including the bronze of Father Francis P. Duffy, chaplain of New York’s Fighting 69th Infantry at the north end of Times Square. You may have also seen his architectural adornments on the Columbia University gates and the Waldorf-Astoria Hotel, and even his 10th Street home, which still features his medallions on its façade.

Keck and his wife regularly hosted lavish parties at their home until 1937, when, according to his son Charles, “he got into a great deal of trouble” after he ignored the advice of his friend the financier John Jakob Raskob (an early investor in General Motors) and bought stock on margin. Keck had to move out and leased his house to a GM executive.

A year after Keck’s 1951 death, his widow sold the building for $40,000 to Charlotte Clough, the author of a book of devotional prayers. In the summer of 1954, she flipped it to Samuel Chernoble, president of a commercial printing house on Varick Street. Like Sean Parker, Chernoble was an innovator, devising new printing processes and pioneering photo offset printing. He sublet part of Keck’s studio to the Republican Club, a group that later launched the career of John V. Lindsay.

In 1970, Chernoble retired and sold the house for $236,200. The buyer, Frank Weinstein, and his brother Alvin had just taken Concord Fabrics, their family-owned garment-center firm, public. Weinstein embarked on a gut renovation, turning the home he shared with his boyfriend into a minimalist showplace with a two-story atrium with a tree growing in it. A garden grew beneath a balcony in the opened-up rear, where there was also a two-car garage. The addition of an elevator and central air conditioning brought the former stable up to date. For contemporary style, the couple kept a tomato soup can signed by Andy Warhol on the counter in his kitchen.

Unfortunately, Weinstein decided to sell and move to Seattle just as real estate crashed in 1989. He started out asking $4.5 million, and after several price cuts, became “very anxious,” according to a broker he worked with. In the end, he demanded an all-cash deal, and settled for $2.05 million in 1991. 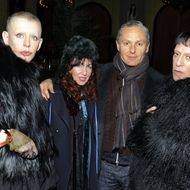 The buyer was Enrico Marone Cinzano, of the aperitif and spirits family. Cinzano named the place Bacchus House and renovated again, keeping only the cubic configuration of Weinstein’s home. He added a rooftop bedroom, a swimming pool, spa, and staff rooms in the basement. He’d eventually fill the atrium with bamboo and throw all-night parties there filled with drag queens and muscle boys. “He was a playboy swinging partier,” says Dan Chernoble, who’d grown up in the house. He met Cinzano one day as he roared out of his garage on a motorcycle. Invited in, he was totally disoriented. “It was nothing like what it had been,” he said. “It was a wonderful place to grow up.” (As it may yet be for bad boy Parker.)


Cinzano waffled about selling, changing brokers several times, but when Parker rented and seemed so right for the house, Cinzano took it as a sign and took the money. “Due to a complete life-style change, I’m in India now,” he says. “I’m living a completely different life.”