After years of hearing that he wasn’t born in Hawaii; that his official state-certified short-form birth certificate wasn’t real; that his family planted fake birth announcements in Hawaiian newspapers, President Obama has released his long-form birth certificate in an effort to finally put an end to the birther conspiracies that have been reignited in recent months by Donald Trump. According to a statement released this morning by White House Communications Director Dan Pffeifer on the White House blog:

The President believed the distraction over his birth certificate wasn’t good for the country. It may have been good politics and good TV, but it was bad for the American people and distracting from the many challenges we face as a country. Therefore, the President directed his counsel to review the legal authority for seeking access to the long form certificate and to request on that basis that the Hawaii State Department of Health make an exception to release a copy of his long form birth certificate. They granted that exception in part because of the tremendous volume of requests they had been getting.

So what horrible secrets does the certificate reveal? Let’s take a look!

So what horrible secrets does the certificate reveal? Let’s take a look! 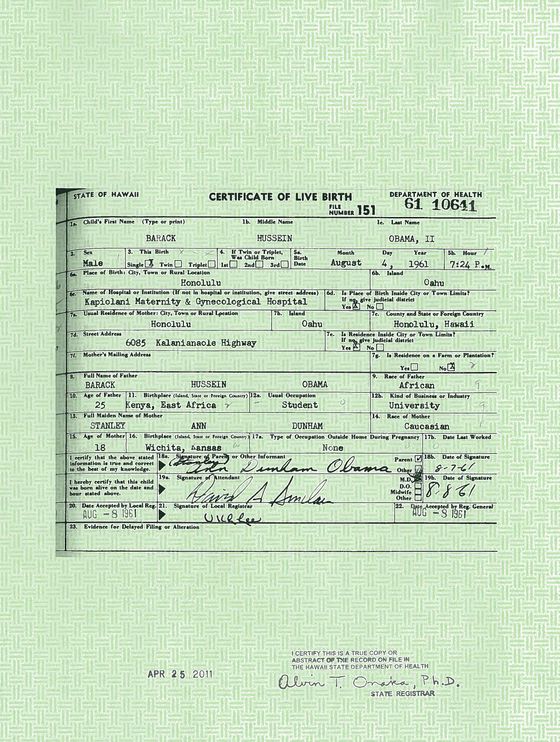 Courtesy of the White House

Oh, he was born in Hawaii, his dad is his dad, and he’s not Muslim. Boring.

Will this put birtherism to rest? Probably not. Many people will be convinced. Many others will just assume that it’s a fake. Donald Trump, for his part, addressed reporters in New Hampshire this morning to take credit. “Today I’m very proud of myself because I’ve accomplished something that nobody else has been able to accomplish,” he said. Which is true, in a way. Before Trump came along, birtherism wasn’t really a big issue. Obama had released his short-form birth certificate; he’d proven his natural-born citizenship, and if people didn’t want to believe it, well, whatever. But once someone as prominent and ubiquitous as Trump started a crusade on the issue, it became all the media talked about.

Trump will continue to portray this as a huge victory. Yes, he got Obama to release his long-form birth certificate. But in doing so, he also revealed himself as a phony. Remember when he said that his investigators were in Hawaii and “they cannot believe what they’re finding“? Apparently, there was nothing to find. Shocker.

Anyway, Obama is expected to speak to the press very shortly. It’s going to be an interesting day. Stay tuned for updates.

Update, 10:02 a.m.: Trump two days ago: “Well I’ve been told very recently, Anderson, that the birth certificate is missing. I’ve been told that it’s not there or it doesn’t exist.”

Update, 10:09 a.m.: Obama made a special appearance in the White House briefing room shortly after releasing his long-form birth certificate this morning, where he expressed hope that, just maybe, America can focus on important things now, like the budget and the debt. He also took an unsubtle shot at Trump when he referred to “carnival barkers.”

Update, 10:22 a.m.: So how are the birthers reacting? Here’s the editor of World Net Daily, a far-right website that has relentlessly pushed birtherism for years:

Update, 11:58 a.m.: Birther queen Orly Taitz tells us that she’s just about convinced that Obama was born in America, but he still might not be a “natural born citizen” anyway.