The Social Network was supposed to be about art imitating the life of Facebook, but Sean Parker’s life seems increasingly to be imitating Aaron Sorkin’s version of events. According to Gawker, around the time the movie came out, Parker traded in Kate Jurkiewicz, his girlfriend of three-and-a-half years, for some public snogging with Internet fameball Julia Allison at the West Village faux-speakeasy the Lion. Shortly thereafter, he started up with Alexandra Lenas, seen here showing off her singer/songwriter talents between some questionable poles on stage in Baku, Azerbaijan (about 1.45 in). Now People is reporting that Parker and Lenas are engaged, just six months since they met. In even further evidence of life imitating art (that imitated life), the two posed as JT, who played Parker in the movie, and Britney for Heidi Klum’s Halloween party. 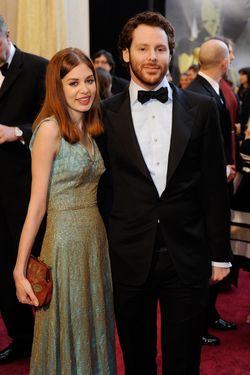 Parker has publicly dismissed his celluloid portrayal as “fictional,” pointing out to crowds at tech conferences that “There are no Victoria’s Secret models in Silicon Valley,” while issuing self-deprecating comments like, “I mean I kind of wish my life were that cool.” But between the arm candy upgrade, plunking down $20 million for Bacchus House in Greenwhich Village, and insinuations in his Vanity Fair profile about a lifestyle that kept him “up very, very late, talking intensely about subjects he cares about and/or partying,” it seems like Parker owes Sorkin an apology, if not a hat tip for the inspiration.

THE FEED
12 mins ago
what we know
what we know
At Least 15 Killed at Texas Elementary School: Officials
By Intelligencer Staff
On Tuesday afternoon, a gunman attacked Robb Elementary School in Uvalde, which serves the second through fourth grades.
4:00 p.m.
2022 midterms
2022 midterms
Republicans May Have Sabotaged Their Best Chance to Beat Whitmer
By Matt Stieb
Five GOP candidates for governor in Michigan — including the top two contenders — faked signatures to get their names on the ballot.
3:17 p.m.
adam neumann
adam neumann
Adam Neumann’s New Business Plan
By Kevin T. Dugan
The former WeWork CEO wants to get rich(er) by helping corporations appear more environmentally sustainable than they really are.