Oh, the perp walk: A glorious American tradition in which a person not yet convicted of any crime is paraded handcuffed before the media as an instantly recognizable icon of guilt. It outraged the French press and political class this week after former IMF president Dominique Strauss-Kahn was publicly escorted to lockup by the NYPD. (Khan was a leading presidential contender in France, so imagine a picture of Mitt Romney in handcuffs getting escorted to the Parisian Rikers, if there is such a thing.) In France, such images are banned. But the perp walk in America, and especially New York, is a time-honored protocol that goes back decades. “I think it is humiliating,” Mayor Bloomberg said on Tuesday. “But if you don’t want to do the perp walk, don’t do the crime.”

The tradition is often attributed to Rudy Giuliani, who gleefully paraded a series of white-collar criminals — like Tim Tabor and a weepy Richard Wigton, who never even saw trial — before the cameras when he was U.S. Attorney back in the eighties. But in truth, it stretches back far further than that. Here’s a little timeline of the tradition in America. 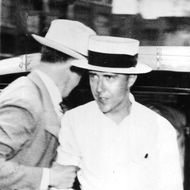 1920s: FBI Director J. Edgar Hoover takes advantage of the perp walk to raise the profile of prosecutors in the eye of the public. He paraded mobsters like Alvin Karpis and Henry Campbell in front of cameras.

1952: During a perp walk after his fourth and final arrest, legendary bank robber Willie Sutton is asked: “Willie, why do you rob banks?” and supposedly answers: “Because that’s where the money is.” This inspired the so-called Sutton’s Law in medicine, which posits that when diagnosing, a doctor should first consider the obvious. Sadly, in his autobiography, Sutton claimed that he never said that line. 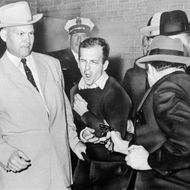 1963: JFK-assassin Lee Harvey Oswald is taken on a number of perp walks after his capture, and even allowed to talk to the press. During the final one, Jack Ruby emerged from the crowd and shot him.

1973: Jerome Rosenberg is convicted of murdering two police officers, but lawyers claim his constitutional rights were violated when police arranged for him to be moved after his voluntary surrender. Before he reached the second police precinct, he was pulled from the cop car and paraded in front of gathered cameras. Officer Raymond Martin told the outraged crowd, “He is the killer, and he is going to burn.” Originally, a jury found in Rosenberg’s favor but that decision was overturned in the Second Circuit by Judge Henry Friendly, who argued that the right to privacy did not extend to this matter. 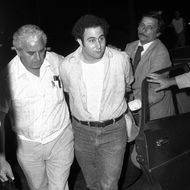 1977: David “Son of Sam” Berkowitz looks almost amused during his perp walk, the images of which soothed a city terrorized by his mysterious murders for over a year.

1995: Upper East Side–doorman John Lauro was busted for rifling through a tenants possessions and brought into a police station house. Shortly thereafter, a local Fox affiliate asked if they could get footage of Lauro, and so officer Michael Charles put him in a squad car, drove him around the block, and then paraded him in handcuffs back into the precinct house. District and Circuit courts found that this particular perp walk violated his Fourth Amendment rights to privacy because there was no legitimate government or law enforcement interest or justification in doing it. They noted, thought, that it may not have been illegal had it been the actual transfer from car to station, as “the interests of the press, and of the public who might want to view perp walks, are far from negligible.” 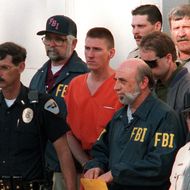 1997: Before he is even arrested in the Oklahoma City bombing case, Timothy McVeigh is taken on a perp walk by the FBI. His lawyers protested that the walk was timed for maximum TV exposure, a claim that was bolstered by the fact that about a dozen FBI agents had been selected to escort McVeigh as a reward for collaring him.

2002: Adelphia CEO John Rigas turns himself in voluntarily and requests not to be taken on a perp walk. This request is denied and he becomes one of a string of famous white-collar criminals — like multi-billion-dollar accounting fraud Scott Sullivan of WorldCom and Enron’s Ken Lay — to undergo the humiliation in the early 2000s.

2003: Rocco Caldarola and James Santerello, arrested for grand larceny, sue Westchester County after civil employees filmed them getting transferred to the police station and gave the tapes to the media. The Second Circuit, this time in a decision co-authored by current Supreme Court justice Sonia Sotomayor, unanimously supported the legality of that (nonfictional) perp walk. “Divulging the arrests also enhances the transparency of the criminal justice system, and it may deter others from attempting similar crimes,” they wrote. “Furthermore, allowing the public to view images of an arrestee informs and enables members of the public who may come forward with additional information relevant to the law enforcement investigation.” 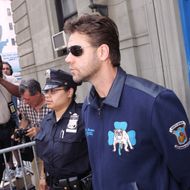 2005: Russell Crowe, wearing a NYPD blue, is strutted before the cameras after his arrest for throwing a phone at an employee in the lobby of the Mercer Hotel.

2009: Bear Stearns hedge fund managers Ralph Cioffi and Matthew Tannin handle their own perp walks with well-dressed dignity — causing the Wall Street Journal to guess they’d been tipped off in time to put on nice outfits.

+Comments Leave a Comment
Walk Like a Perp: A Brief History of Making an Entrance in Handcuffs