Noble patriot John McCain shares some thoughts on the debt ceiling debate with the National Review:

Over in the House, “I am told that it is very difficult,” McCain says. “There are Republicans who are committed, like Michele Bachmann, to vote against raising the debt limit under any circumstances.” Bachmann, he warns, is acting “sort of like Senator Obama did.”

In 2006, then-senator Obama refused to lift the debt limit. Speaking on the floor, Obama ascribed his opposition to the “failure” of George W. Bush to address the country’s fiscal problems.

McCain has little patience for such posturing. He tells me that political disagreement with the president — any president — should not jeopardize the credit rating of the United States.

Here’s the thing. Yes, President Obama voted against raising the debt ceiling when he was a senator in 2006. Now that he’s the president and he needs other people to raise the debt ceiling, he regrets it. But Obama and the Democrats were in the minority party in the Senate in 2006, and members of the minority party, while fully understanding the importance of raising the debt ceiling, have almost always voted against doing so. Why should they have this awful-looking stain on their record when their support isn’t needed anyway? 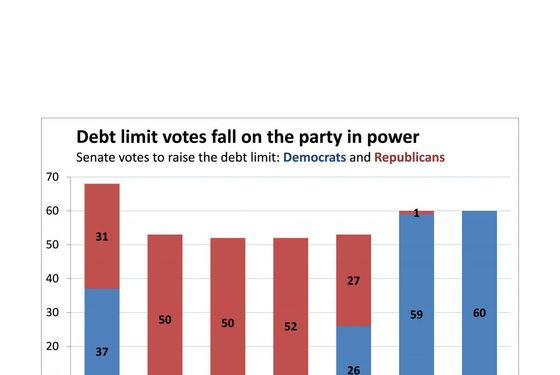 John McCain knows exactly how the game is played because he has been in the Senate for 1,000 years, and as a member of the GOP Senate minority, he voted against raising the debt ceiling in 2009 and 2010. Not only is his no-patience-for-political-posturing shtick utterly phony, he’s also wrong about the comparison between Bachmann and Obama. Obama voted against raising the debt ceiling knowing he wouldn’t have any effect on the outcome. Bachmann’s party is in the majority in the House, and GOP votes are essential for raising the debt ceiling. Obama’s decision was a political one, while Bachmann’s is political and reckless.