In the day and a half since the Daily Caller revealed Michele Bachmann’s history of migraines, the questions surrounding the severity of the condition and how it would impact her ability to perform the duties of the presidency have dogged her campaign. Politico and ABC News dug deeper into the story with the help of a former Bachmann insider, reporting that Bachmann’s migraines have forced her to miss votes and left her “unable to function.” Karl Rove advised Bachmann to “get her doctors out there, quickly.” And Tim Pawlenty implied that if Bachmann is going to be incapacitated by a headache for even one second as president, she should probably just drop out right now, possibly propelling him to a fifth- or sixth-place finish at the Ames straw poll.

“All of the candidates I think are going to have to be able to demonstrate they can do all of the job all of the time,” he told reporters after an event in Indianola.

He added: “There’s no real time off in that job.”

Actually, there’s lots of it. That’s why presidents can clear brush and play golf and grab ice cream and screw their mistresses, sometimes all at the same time. Nevertheless, planned downtime is different than being unexpectedly incapacitated by a headache during, say, a terrorist attack. Bachmann, clearly, had to do more than simply assure people that her migraines are an easily managed nuisance at worst.

This afternoon, she did, by heeding Rove’s advice and releasing a note from the attending physician of the U.S. Congress confirming her assertion that her migraines are completely under control. 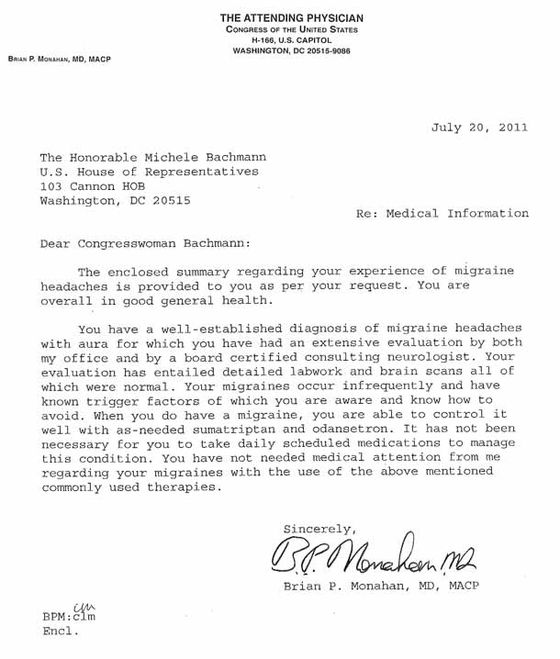 Courtesy of the Michele Bachmann Campaign

This should help to quell the issue for now, allowing us to return our focus to a myriad of other Bachmann-related controversies, such as her anti-gay bigotry and her laughable grasp of Yiddish. But the next time Bachmann cancels a campaign appearance with any kind of vague or dubious explanation, you can bet reporters will be asking whether she’s lying down in a dark room somewhere.

+Comments Leave a Comment
Michele Bachmann’s Doctor to the Rescue

THE FEED
8:00 a.m.
the inside game
the inside game
The 3 Most Important Races in the Post-Roe Midterms
By Gabriel Debenedetti
“The stakes have gone up because these races are fundamental to protecting democracy and abortion rights.”
7/4/2022
plagued
plagued
The BA.5 COVID Surge Is Here
By Chas Danner
The worrisome Omicron subvariant, which is better at reinfecting people than any other, is rapidly gaining ground in the U.S.
7/3/2022
early and often
early and often
Read the Nastiest Lines From Trump’s $75 Burn Book
By Margaret Hartmann
The cash-grab coffee-table book Our Journey Together is filled with mean captions written by Trump himself. Here are his most unpresidential musings.

7/3/2022
life after roe
life after roe
Will Dobbs Change the Way We Feel About ‘Good’ Republicans?
By Ed Kilgore
It’s time to reconsider whether to keep lionizing people like Mike Pence and Liz Cheney.
7/3/2022
the city politic
the city politic
New York’s Primaries Were Decided by Politics As Usual
By Errol Louis
Despite national upheaval, the turnout and results remained distinctly normal.
7/2/2022
headaches
headaches
Yep, July 4 Weekend Air Travel Is a Complete Mess
By Chas Danner
More Americans are hitting the skies than did in 2019 before the pandemic, and the increased delays and cancellations will likely continue all summer.
7/2/2022
life after roe
life after roe
Could Dobbs Be Reversed Like Roe Was?
By Ed Kilgore
As the fight for abortion rights shifts to the states, advocates shouldn’t give up on eventually prevailing in the Supreme Court.
7/2/2022
games
games
It’s Not Too Early to Get Excited About a Subway Series
By Will Leitch
The Mets and Yankees are simultaneously great for the first time in ages.
7/1/2022
sports
sports
Brittney Griner’s All-But-Predetermined Trial Begins
By Benjamin Hart
The WNBA star is likely to be convicted and faces up to ten years in Russian prison.
7/1/2022
just checking in
just checking in
So What Is Rudy Giuliani Up to These Days?
By Margaret Hartmann
Trump’s former attorney has been keeping busy by dealing with January 6–related legal woes, making weird videos, and arguing with parade hecklers.
7/1/2022
the national interest
the national interest
The Democratic Party Needs Better Moderates
By Jonathan Chait
The centrists have lots of complaints but no solutions.
7/1/2022
the city politic
the city politic
Waiting (and Waiting) for an Adams Doctrine
By David Freedlander
Six months into a highly energetic mayoralty, how has Eric Adams changed the city — if at all?
6/30/2022
u.s. supreme court
u.s. supreme court
Supreme Court Agrees to Hear Case That Could Gut Voting Rights
By Ed Kilgore
Odds are good the conservative majority will confirm total legislative control of redistricting and (more alarmingly) of all election rules.
6/30/2022
off-season drama
off-season drama
The Nets May Be Truly Screwed Now
By Matt Stieb
Kevin Durant reportedly wants out, leaving Kyrie Irving as possibly the only superstar standing next year.
6/30/2022
the body politic
the body politic
The Abortion Stories We Didn’t Tell
By Rebecca Traister
How decades of silence left us unprepared for the post-Roe fight.
6/30/2022
early and often
early and often
Supreme Court Ends Term by Sabotaging Fight Against Climate Change
By Ed Kilgore
The finale to this devastating term was a landmark decision by conservative justices limiting the EPA’s ability to regulate greenhouse-gas emissions.
6/30/2022
crypto
crypto
Oh Look, RadioShack Is Edgy on Twitter Now
By Kevin T. Dugan
A marketing YouTuber is behind the zombie brand’s online resurgence, which is really a crypto gambit.
6/30/2022
explainer
explainer
Trump’s Long Campaign to Steal the Presidency: A Timeline
By Ed Kilgore
The insurrection wasn’t a one-day event. It was the culmination of a multifaceted, yearslong plot — and it isn’t over.
6/30/2022
life after roe.
life after roe.
Women Aren’t Saviors
By Sarah Jones
Liberation requires collective struggle.
6/30/2022
life after roe
life after roe
Biden: Scrap the Filibuster (Once) to Codify Abortion
By Benjamin Hart
The ultimate Senate traditionalist backs a more drastic approach for the second time in a year.
6/30/2022
the national interest
the national interest
Democrats Must Reform the Supreme Court to Save It
By Jonathan Chait
Republicans won control of the Court playing by the rules. The rules are bad.
6/30/2022
life after roe
life after roe
State Constitutions Are Now an Urgent Abortion Battleground
By Ed Kilgore
Now that Roe v. Wade is gone, state courts, and in some cases voters, will decide whether to give abortion rights constitutional protection.
6/29/2022
just asking questions
just asking questions
Filmmaker Alex Holder Says Trump Was ‘Utterly Irrational’ After January 6
By Benjamin Hart
The documentarian talks about what he saw before, during, and after the attack on the Capitol while he was embedded with the First Family.
6/29/2022
early and often
early and often
The Most Explosive Revelations From Cassidy Hutchinson’s Testimony
By Margaret Hartmann
The ex–Mark Meadows aide testified that Trump lunged at a Secret Service agent on January 6 and said of the armed mob, “They’re not here to hurt me.”
6/29/2022
early and often
early and often
2022 Midterms: A Guide to the Races Worth Watching
By Ed Kilgore
A cheat sheet to keep track of all the crucial races, primary upsets, and campaign drama — Trump-fueled and otherwise — from now through Election Day.