Since the moment his presidential campaign began over four years ago, Barack Obama has allegedly been on the verge of losing the Jews. His Muslim ancestry and Muslim-sounding name and associations with people who were Palestinian or who at least didn’t hate Palestinians would be too much for this historically Democratic-leaning voting bloc. At least that’s what we were told, over and over and over again, ad nauseum.

The list could go on nearly forever, but you get the point. Obama then went on to win 78 percent of the Jewish vote in the election, about the same percentage received by John Kerry in 2004.

But of course, the “Obama is losing the Jews” meme continued throughout his first term as president. It picked up steam again last week when, in the wake of a May speech on the Middle East in which Obama expressed less than complete and universal fealty to everything that Israel says or does or wants, Politico’s Ben Smith reported that Obama had reached a “tipping point” with the Jews that could “cost the president votes and money in 2012 and will not be easy to repair.” Today, Gallup released some new numbers on Obama’s Jewish support that seem to refute the suggestion that the Jews have abandoned Obama. 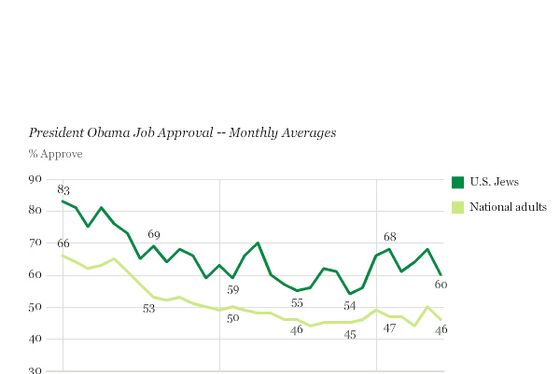 Now, it’s true that Obama’s support among Jews has declined since his inauguration. But it has also declined to about the same degree with the general population.

Obama’s Jewish support right now stands at 60 percent, which is better than it was for much of 2010, long before Obama made that controversial speech. Still, if that’s the share of the Jewish vote Obama gets, he’ll be in trouble in, say, Florida. But we don’t expect that to happen. When it’s a choice between a hawkish Israel-revering Republican and a somewhat more evenhanded Obama, the Jews will still go with Obama, because Jewish-Americans are, first of all, mostly liberal, and, secondly, concerned about other things aside from which candidate can proclaim his love for Israel the loudest.