In the spring of 2008, FBI agents announced that a white conical-shaped parachute that was remarkably similar to that used by the infamous sky pirate D.B. Cooper  who threatened to blow up a Boeing 727 in 1971, and then jumped from the plane over Washington, Oregon carrying $200,000 in ransom money, never to be seen again  had been found. A blizzard of news stories followed, from the New York Times to aviation websites in Italy.

A few days later, after the Bureau actually checked out the chute, the lead turned out to be bogus.

Today comes news of a similar kind. In an interview with a British journalist, the FBI’s media rep in Seattle told of a new suspect in the legendary hijacking case. The new suspect, the rep said, was “our most promising” to date, so promising that fingerprint and DNA samples had been sent to Quantico for testing in hopes of getting a match.

The lead on the new suspect could indeed be the case closer, but what I’ve learned after spending three years investigating the Cooper case is that riveting clues and leads have a way of fizzling out into duds.

The Curse, Cooper sleuths call it.

When I first started my reporting, then case agent Larry Carr wanted to exhume the body of a dead suspect in order to get a DNA match. The problem, Carr learned, is that it would be impossible to come up with a definitive conclusion in the Cooper case based on forensic evidence. He claimed lab scientists told him there were integrity issues with two key pieces of physical evidence. 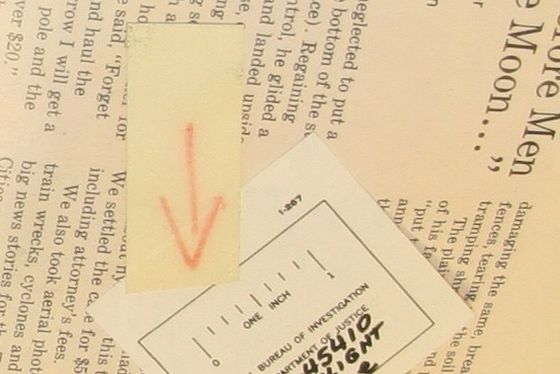 Published for the first time, this photo shows a fingerprint found in the Northwest Orient in-flight magazine that agents discovered in front of 18-E, where Cooper sat on the hijacked plane.

The first were the fingerprints themselves. When agents dusted off the plane that Cooper jumped from after it landed in Reno on the night of November 24th, 1971, Carr told me there were too many fingerprints around 18E, the seat where Cooper sat, to learn which one was the hijacker’s. Agents dusted every page of the in-flight magazine resting in front of the hijacker, but how could they be sure which prints were Cooper’s and which were other passengers, or crew members?

The other piece of evidence Cooper definitely did touch were eight Raleigh filter-tipped cigarette butts, found by agents in the ashtray of row 18, where he was sitting. These cigarettes were crucial for Carr to test because they would not only have fingerprints on them —prints that were definitely Cooper’s — but they would also contain traces of saliva.

The problem, Carr found, was that it was unclear where the cigarette butts were — perhaps in Reno, where the plane landed, or FBI headquarters in Las Vegas, or Quantico, where they were initially tested in the early 1970’s. Without the butts, there was no DNA evidence — even a faint trace of saliva discovered on the clip-on tie the hijacker left behind wasn’t a big enough sample, Carr said, to identify his precise genetic code.

It’s unclear what evidence the FBI in Seattle is now holding. Have they found the cigarette butts? Has new and better physical evidence been located? If not, the latest “most promising” suspect could turn out, like the white conical parachute and the thousands of other suspects of persons of interest in the case, to be an irritatingly close — but not definitive — match.

Update: According to Ann Dietrich of the FBI’s Seattle field office, the FBI is testing a partial fingerprint against one from the in-flight magazine agents found in front of Cooper’s seat. I’ve seen this magazine in the files, and there were partial prints located all over it — presumably from different passengers. The flight made four stops that day, before picking Cooper up in Portland. So how does the Bureau know which partial print is Cooper’s?

“There’s a lot of if’s on this one,” Dietrich said.

Geoffrey Gray’s SKYJACK:The Hunt for D.B. Cooper, published by Crown, will be in bookstores on August 9th.

+Comments Leave a Comment
The Curse of D.B. Cooper: Why the Latest Break in a Legendary Skyjacking Case May Not Pan Out

THE FEED
20 mins ago
what we know
what we know
Salman Rushdie Is on the ‘Road to Recovery’ Following Gruesome Attack
By Chas Danner and Victoria Bekiempis
The acclaimed author was grievously wounded and remains hospitalized, but was taken off a ventilator and again able to speak on Saturday.
1:58 p.m.
u.s. capitol
u.s. capitol
Man Dies by Suicide After Driving Car Into Barricade Near U.S. Capitol
By Chas Danner
The man drove into a barricade and fired a gun in the air, but police don’t seem to believe he was targeting any members of Congress.
8/13/2022
the city politic
the city politic
New York Times Sticks It to Progressives in New York’s Democratic Primary
By Ross Barkan
The editorial board’s backing of Dan Goldman, Jerry Nadler, and Sean Patrick Maloney for Congress also shows a disdain for identity politics.