Rick Perry’s dubiousness over the validity of evolution has drawn a lot of attention in the past 24 hours, but does anyone care, aside from the snobby coastal eggheads who control the liberal media? That is, will voters even hold it against Perry — or Michele Bachmann, for that matter — for willfully ignoring the scientific consensus about one of the most basic tenets of modern science? The depressing answer for the snobby coastal eggheads: Eh, kind of.

The most important thing to consider in looking at the potential electoral fallout from the questioning of evolution is that a shockingly huge chunk of the American electorate doesn’t believe in evolution themselves. According to a December 2010 Gallup poll, 40 percent of Americans agree with the statement, “God created human beings pretty much in their present form at one time within the last 10,000 years or so.” Forty. Percent.

That’s a lot a people backing a theory that has been completely refuted by actual, you know, evidence. But it is still less than a majority. And, in fact, a different Gallup poll showed that when candidates express doubts about evolution, more voters will penalize them for it than reward them. 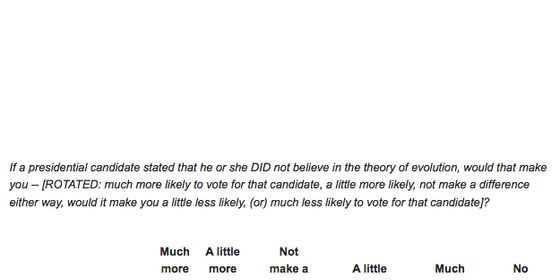 Whatever damage Perry and Bachmann suffer from questioning evolution, they’re not likely to experience it until the general election, simply because Republican voters are much more doubtful of evolution than Independents or Democrats.

Of course, history demonstrates that the backlash, even in the general election, only goes so far. During his 2000 campaign, George W. Bush supported teaching creationism alongside evolution in schools, and expressed skepticism about evolution to the New York Times. “I think that, for example, on the issue of evolution,” Bush said, “the verdict is still out on how God created the earth.” On the campaign trail in 1980, Ronald Reagan said of evolution, “I have a great many questions about it. It is a theory, it is a scientific theory only. And in recent years it has been challenged in the world of science and is not believed in the scientific community to be as infallible as it once was. I think that recent discoveries down through the years have pointed up great flaws in it.”

Both men ended up doing okay for themselves.

+Comments Leave a Comment
Do Voters Even Care If a Presidential Candidate Doesn’t Believe in Evolution?