A big part of any presidential campaign is fooling the electorate into believing that the candidate is a normal, likable human being. This is no small trick, since people who want to be president tend to be hyperactive ambition robots from the Planet Ego. And their families are so squeaky clean and perfect, it’s often hard to relate to them, too. So campaign strategists have to highlight a candidate’s rare charms, their scant idiosyncrasies, and, if at all possible, any smidgen of a hidden talent. Barack Obama played basketball, George W. Bush cleared brush on his ranch, and Bill Clinton played the saxophone. And talent can cut both ways: John Kerry’s staff realized too late that their candidate’s windsurfing and sailing prowess were the worst kind of liability.

So what can we expect to see from the current crop of candidates? Based on exhaustive biographical research, here are our guesses:

Jon Huntsman: Piano-playing. This is not Huntsman’s only skill: He also rides motorcycles and speaks Mandarin Chinese fluently — but don’t expect him to flaunt the latter too much; it’ll remind voters he worked as this administration’s ambassador to Beijing. And as wary as conservatives are of China, they’re even more wary of Barack Hussein Obama. Biking has appeared in his campaign ads already, but expect the piano to be the most prominent shtick. Huntsman dropped out of high school to play keyboard in a band called Wizard, so he can at least claim that this hobby was once a guiding force in his life. (They played original songs and REO Speedwagon covers for five hours a day in a converted radio station on the edge of town.) If he continues to use his skills for semi-adorable impromptu concerts like the one below, this will be a good asset for him.

Herman Cain: Singing. Cain released a gospel album back in 1996, which showcased his gentle, midrange voice over some seriously Luther Vandross-style keyboards. In a race where the Republicans are falling all over each other to stand closer to Jesus, this skill might get Cain a small but useful edge. (Cain could also take advantage of his recent gaffe where he attributed an inspirational quote to an unnamed poet, when it was really a lyric from a Donna Summer song written for a Pokemon movie. A Donna Summer–Herman Cain duet? YES PLEASE.)

Mitt Romney: Running. When a candidate has no remarkable or unusual skills, they can always fall back on a universal athletic activity. In Romney’s case, this is his affinity for running. He makes sure to hit the pavement every other day on the campaign trail, and his family hosts an annual triathlon at their New Hampshire home. This could work for Romney — unlike Clinton jogging, seeing Romney in action doesn’t make you want to clutch at your heart and take a Lipitor.

Newt Gingrich: Divorce. Ha! Too easy. No, Gingrich’s real hobby is reviewing books on Amazon.com. Before he got into the swing of campaigning, he would post a review about once a week — only positive ones, focusing on histories and plot-driven novels. He’s done over 150, ending in 2008. They’re kind of gripping, actually. “The path home from the jungle of Central America proves to be a treacherous one for Archaeologist Walt Gaines,” he writes, for example, in his review of Fallen Idols. “And upon returning to the U.S., his bizarre behavior perplexes all who know him, or think they do.” But as far as humanizing him on the campaign trail, this is right up there with clipping toenails and sharpening pencils. 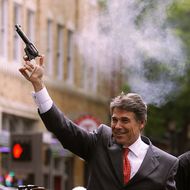 Rick Perry: Bow-hunting. Rick Perry is a guy who once shot a coyote with a handgun that he happened to be carrying while he was jogging. That’s like two hobbies in one! But if he really wants to prove his hunting bona fides, Perry can point to the bow-hunting trips he’s taken with Ted Nugent. Perry can fell a wild turkey with a bow, which is no easy feat — consider that most wild game is shot with shotguns because of the wide target range the pellets create. At the very least, this hobby adds to his stature as the Candidate Whose House You Would Be Least Likely to Attempt to Burgle.


Michele Bachmann: Adopting foster children. Seriously, this is the one aspect of Bachmann’s personal life that her team has been pushing. All others seem to mostly relate to Jesus, and getting other people to believe in Jesus, or rejecting people on behalf of Jesus. We haven’t seen a lot of these kids come forward — only one commented for the record in a recent New Yorker profile — but if she has a good relationship with them, expect them to start popping up more in the near future. Maybe one of them can explain the mysteries of the Bachmann marriage!

As for Ron Paul and Rick Santorum, we really couldn’t dredge up any evidence of a hidden talent that their campaign teams have been pushing. You guys! You must at least play the kazoo or something. What gives?