In 2004, my friend Paul Campos wrote a book called The Obesity Myth. In it, he argued that claims about the health dangers of obesity by public authorities are overblown — that eating healthy food and exercise matter, but the impact that fat itself has on health is less than we think. (You can eat well, exercise often, and still be fat.) Campos diagnosed the overblown attacks on obesity as a moral panic. The American overclass prizes thinness to a degree that is actually unhealthy, and the disgust privileged Americans feel toward fat people, who are more likely to be poor and middle-class, dresses itself up as medical advice.

That book is going to be the essential text to understand the currents of cultural prejudice that will be marshaled against Chris Christie should he choose to run for president. Two such examples can be seen today.

Eugene Robinson writes today in the Washington Post that Christie’s weight inhibits his ability to serve as president. Michael Kinsley, writing in Bloomberg View, goes farther, calling it an outright disqualification. Neither of these (generally excellent) columnists offers much beyond overclass social bias.

Robinson argues that Christie is too fat to perform his job optimally, citing one episode of Christie being hospitalized for asthma. If that were true, you’d see it in his tenure as governor. But Robinson doesn’t argue that Christie failed to tackle his gubernatorial duties with sufficient vigor. How could you argue that? Like him or not, Christie has undoubtedly enjoyed overwhelming success in moving through his agenda and carrying out a taxing regimen of browbeating and insulting skeptical New Jersey-ites.

Robinson edges toward what I suspect is the deeper belief at work, urging Christie to follow the example of others who have lost weight. The premise here is that weight is a marker of personal discipline, and anybody who’s fat must simply be too lazy to take care of themselves. This conveniently fulfills the desire to categorize obesity as a character flaw, but ignores the extreme difficulty of sustained weight loss. Robinson cites, as an example of somebody who has “lost weight and kept it off for extended periods,” Mike Huckabee. Has he seen Huckabee lately? Here’s a picture from earlier this year: 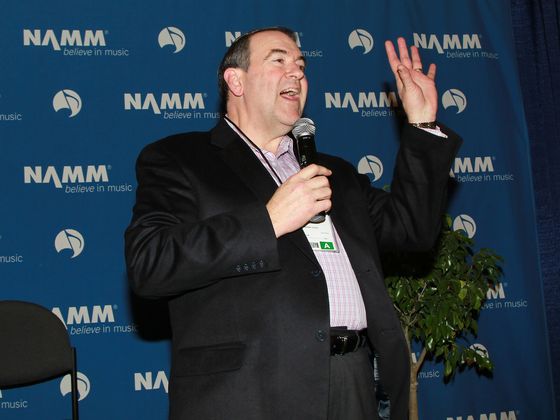 Kinsley more explicitly casts Christie’s weight as a moral failing, arguing, “a presidential candidate should be judged on behavior and character, not just on policies.” It’s pretty jarring to see somebody openly make the case that being fat is a sign of poor character. It certainly helps make Campos’s case that there’s a moral panic afoot.

He calls Christie’s weight “a too-perfect symbol of our country at the moment, with appetites out of control and discipline near zilch.” (I don’t agree that this is the problem right now, but never mind.) He goes on to concede that Christie has in fact reduced the budget deficit, which seems hard to deny. Doesn’t this blow that argument out of the water, then? Kinsley concludes, strangely:

[Christie] certainly makes all the right noises about fiscal discipline and seems to have done well so far as governor of New Jersey. Perhaps Christie is the one to help us get our national appetites under control. But it would help if he got his own under control first.

But why would it help? Why does his weight matter at all? The only real reasoning I see here is that American elites view obesity with disgust, and they’re repulsed at the notion that a very fat guy could rise to a position of symbolic leadership. It’s not a very attractive sentiment.

+Comments Leave a Comment
Chris Christie Is Fat. So What?