Number of Times the Word “Obamacare” Was Uttered: Nineteen

Number of Times the Word “Bush” Was Uttered: Four

Number of Times the Word “Reagan” Was Uttered: Five

Number of Candidates Who Were Directly Prompted by Anderson Cooper to Share Their Opinion on 9-9-9: All of them.

Worst Suggestion: “I invite Americans to do their own math.”  Herman Cain, under attack for his 9-9-9 plan.

Fruit That Is Actually the Most Different From Apples: Square watermelons.

3. Mitt Romney versus Newt Gingrich on the individual mandate:

Dumbest Question: “Herman Cain … are either Governor Perry or Governor Romney, are they the ones who should be president?” — Anderson Cooper.

Sassiest Mitt Romney Put-down: “Governor Perry, you say you have got the experience. It’s a bit like saying that, you know, the college coach that has lost 40 games in a row has the experience to go to the NFL.” — Romney on border security.

Slimiest Personal Attack: “Well, I think the person who really has a problem with illegal immigration in the country is President Obama. It’s his uncle and his aunt who are illegal aliens who’ve been allowed to stay in this country, despite the fact that they’re illegal.” — Michele Bachmann.

Three Most Misleading Accusations:
3. “You’ve blown a hole in the budget up there.” — Rick Santorum on Romneycare. In fact, as the Los Angeles Times reports, “And while state healthcare spending has surged as people lost their jobs in recent years, the law has not blown a hole in the state budget, according to a 2009 analysis by the fiscally conservative Massachusetts Taxpayers Foundation. The group concluded that out of a state budget of $30 billion, the coverage expansion added just $88 million a year to state spending over the first four years.”

2. “You hired illegals in your home and you knew about it for a year.” — Rick Perry to Mitt Romney. The truth is a bit more complicated: As the AP explains: “In 2006, Romney learned that the landscaper of his suburban Boston home had employed illegal immigrants. He gave the company a second chance under the condition that it would no longer employ undocumented workers. But in 2007, during the height of his first Republican presidential campaign, the same company was caught employing illegal immigrants at Romney’s home. Romney then fired the landscaper.”

1. “You were the chairman of Al Gore’s campaign.” — Mitt Romney to Rick Perry. No matter how many times they say it, it’s just not true. Perry had a minor role in Al Gore’s 1988 presidential campaign in Texas. He was not a chairman.

Worst Filter: “So we went to the company and we said, look, you can’t have any illegals working on our property. I’m running for office, for Pete’s sake, I can’t have illegals.” — Mitt Romney, implying that he would have been fine with hiring illegal immigrants if he wasn’t running for office.

Most Likely to Serve as the Captain on a Carnival Cruise Immediately Following the Debate: Michele Bachmann 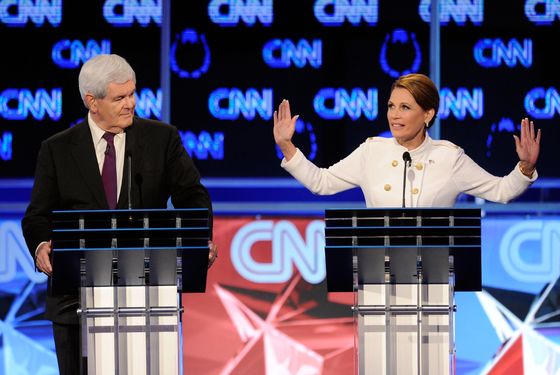 Most Blatant Use of Identity Politics: “When you talk about housing, when you talk about foreclosures, you’re talking about women who are at the end of their rope because they’re losing their nest for their children and for their family. And there are women right now all across this country and moms across this country whose husbands, through no fault of their own, are losing their job, and they can’t keep that house. And there are women who are losing that house. I’m a mom. I talk to these moms. I just want to say one thing to moms all across America tonight. This is a real issue. It’s got to be solved … Hold on, moms out there. It’s not too late.” — Michele Bachmann

Most Hostile to Occupy Wall Street: “What are the people who are protesting want from bankers on Wall Street, to come downstairs and write them a check?” — Herman Cain.

Most Sympathetic to Occupy Wall Street: “Well, I think Mr. Cain has blamed the victims. There’s a lot of people that are victims of this business cycle. We can’t blame the victims …. The middle class got stuck. They got stuck. They lost their jobs, and they lost their houses. If you had to give money out, you should have given it to people who were losing their mortgages, not to the banks.” — Ron Paul.

3. “I would cut all foreign aid … I don’t think aid to Israel actually helps them.” — Paul on cutting aid to Israel.

1. “They’re all suspects. They’re not terrorists. You haven’t convicted them of anything.” — Paul on prisoners in Guantanamo Bay.

Most Blatant Lie About President Obama: “He doesn’t have a jobs plan even now.” — Mitt Romney, ignoring the America Jobs Act that President Obama has been obsessively talking about and waving around in his hand for the past five weeks.

Best Historical Reference That Nobody Got: “How can you have the Northwest Ordinance of 1787 which says religion, morality, and knowledge being important, education matters.” — Newt Gingrich.

Least Flattering Stat: “Well, the Pew poll last week asked how many people in this country can name any of us? And less than 50 percent could come up with even one.” — Rick Santorum, attempting to defend his barely existent poll numbers.

Worst Geography: “Now with the president, he put us in Libya. He is now putting us in Africa.” — Michele Bachmann.

Worst Memory: Cain continued, “I said that I believe in the philosophy of we don’t negotiate with terrorists. I think — I didn’t say — I would never agree to letting hostages in Guantanamo Bay go.” Five hours earlier, he had told Wolf Blitzer that he “could see himself” trading Guantanamo Bay prisoners for an American solider held by a terrorist group:

After the debate, Cain told Anderson Cooper that he “misspoke” to Blitzer earlier in the day. He added, “Because I didn’t, you know, things are moving so fast.”

Most Horrible-Sounding Campaign Promise: “As the nominee, I will challenge Obama to meet the Lincoln–Douglas standard of seven three-hour debates, no time — no moderator, only a timekeeper.” — Newt Gingrich.

Least Burning Question That Was Debated for 70 Seconds: Whether the Iran-Contra weapons deals of the mid-eighties were a good idea.