Number of Seconds Into His Very First Answer That It Took Herman Cain to Mention His 9-9-9 Tax Plan: Six.

Number of Times It Was Mentioned in the Last Debate: Five

Number of Times the Word “Obamacare” Was Uttered: 19

Most Ignored Rule: “The rules are one minute for an answer.”  Charlie Rose

Least Original Huntsman Joke: “I thought it was the price of a pizza when I first heard it.” — Jon Huntsman repeating a line about Herman Cain’s 9-9-9 plan that everyone has used for the past month.

Most Awkward Jon Huntsman Joke: “Since this discussion is all about economics, Governor Romney, I promise this won’t be about religion.” — Jon Huntsman, preparing to ask his candidate-to-candidate question to Mitt Romney.

Number of Economic Advisers Herman Cain Obviously Has: Even though he says he had “a number of … well-recognized economists that helped me to develop this 9-9-9 plan,” clearly it was just this one guy, Rich Lowrie, who is not actually an economist. 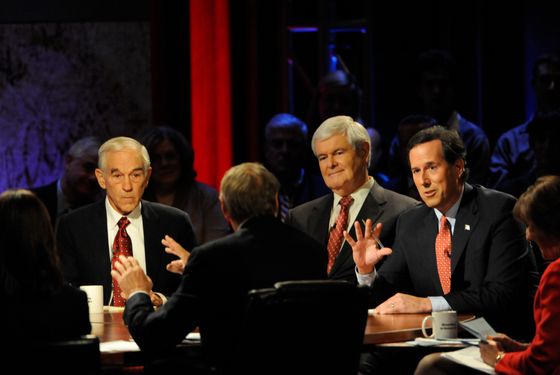 Best Pithy Line: “The problem with that analysis is that it is incorrect.” — Herman Cain, on a Bloomberg Government analysis that showed his 9-9-9 tax plan would collect $200,000,000 less in taxes per year.

Most Dangerous Out-of-Context Quote: “I want to go to war with China.” — Rick Santorum, on wanting to engage in a trade war with China. (It’s also a pretty dangerous in-context quote.)

Best Illustration of How Unwelcome Ronald Reagan Would Be in the Current GOP: The video of Reagan calling for higher taxes in order to reduce to the deficit.

Best Reference That Nobody Got: “The United States Congress put into place the Spanish-American War tax in 1888.” — Michele Bachmann.

Best Hair-Splitting: Herman Cain adamantly denied that he ever called Ron Paul and his followers “ignorant” for wanting to audit the Federal Reserve. That is technically true. He merely said that “people are calling for this audit of the Federal Reserve because they don’t know enough about it.”

3. Rick Santorum: “I am not done yet. I’ve only been able to answer one question, unlike everybody else here.”

Number of Times Newt Gingrich Complained About the Questions or Moderators: None!

Most Tone-Deaf Remark: Asked who “has been most successful” as Federal Reserve chairman in the past 40 years and “might serve as a model for that appointment,” Herman Cain picked Alan Greenspan. Some reactions from conservatives on Twitter:

Three Things Michele Bachmann Said About Her Own Biography That Are Not True:

1. “I spent my whole life in the private sector.” — Bachmann has been a member of Congress, a state senator, and an IRS employee.

Three Most Factually Inaccurate Bachmann Statements Aside From Everything She Said About Her Life:

3. “Nine years from now the Medicare hospital Part B trust fund is going to be dead flat broke.” — Michele Bachmann. As the Washington Post points out, Bachmann meant Medicare Part A. Also, “Under one set of estimates by the trustees, the Part A trust fund’s expenditures begin to exceed income in nine years,” but it won’t be “flat broke” until 2024.

2. “The way that Obamacare runs, there’s a board called IPAB. It’s made up of fifteen political appointees. These fifteen political appointees will make all the major health-care decisions for over 300 million Americans.” — Michele Bachmann. As a Bloomberg fact-check explains, “The board only has authority over Medicare, in which about 48 million elderly and disabled Americans are now enrolled, not the 300 million Bachmann mentioned. The law doesn’t grant the panel power to make health-care decisions and prohibits the group from cutting benefits, changing eligibility rules or increasing beneficiaries’ premiums or cost-sharing. Instead, the board’s main tool for cutting spending will be reducing payments to providers.”

1. “Well, in the 1980s, Ronald Reagan produced an economic miracle, and while all of us were wishing and yearning for a third term for Ronald Reagan, Governor Perry, you were campaigning and co-chairing Al Gore’s election campaign for president of the United States.” — Michele Bachmann. Perry supported Al Gore’s 1988 presidential election campaign and helped out in a very minor way but he did not “co-chair” Gore’s campaign, nationally or in Texas.

Nicest Thing Anyone Said About President Obama: Mitt Romney said President Obama is “well meaning, but just over his head when it comes to the economy.”

Worst Post-Debate Moment: Rick Perry told a Dartmouth student that America fought the Revolutionary War in the sixteenth century. He was two centuries off.