Earlier this month, Facebook comments surfaced in which people who appeared to be NYPD officers called participants in the West Indian Day Parade “savages” and “animals.” Commissioner Ray Kelly promised an investigation and said, “It is disturbing when anyone denigrates a community with hateful speech. It is unacceptable when police officers do it.” A similar conversation seems to have taken place between cops about Occupy Wall Street protesters on the public Facebook page of Michael DeRosa Sr., whose profile picture reads NYPD, written over a thin blue line.

The blog Addicting Info points to the exchange, which occurred on November 17, Occupy Wall Street’s Day of Action. DeRosa’s status update, sent via mobile, says, “On my way to wall street….. Let the savagery begin…. Hey Aaron see its not a racist statement!” As Gothamist notes, DeRosa’s name also appears in the West Indian Day Parade group, and the comments on his OWS post include one by Wayne Rhatigan, whose name matches that of an NYPD officer.

Rey Hernandez, whose profile picture is also a thin blue line (a symbol for police), comments, “wish i was there with you guys..it would be nice to crack a white guy over the head…lmao….” Another person adds, “Lock one up for me!” Here’s the entire exchange: 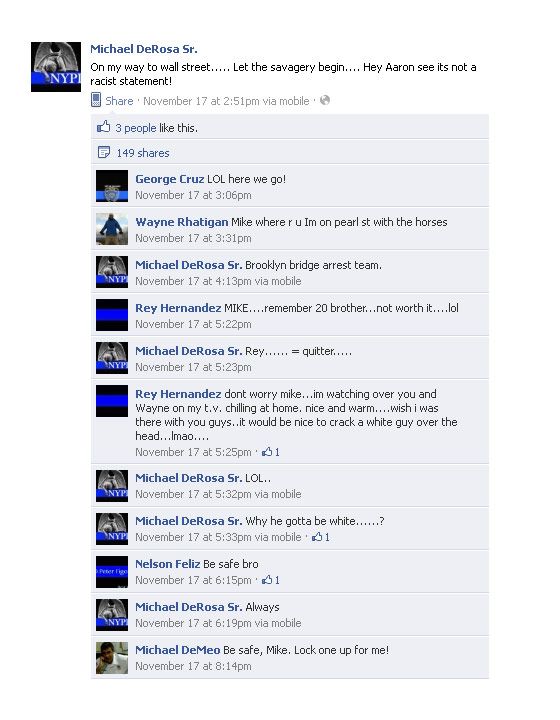 It is possible that these accounts belong to deranged imitators, although video evidence from Occupy Wall Street indicates that at least a bad handful of those sworn to protect and serve have a warped perception of their duties. But to publicly brag about it just seems stupid.