There exists a concept in psychology called “mirroring”; as Intel’s favorite social scientist, Dr. Wikipedia, explains it, “It may include miming gestures, movements, body language, muscle tensions, expressions, tones, eye movements, breathing, tempo, accent, attitude, choice of words/metaphors and other aspects of communication. It is often observed among couples or close friends.” Mirroring, as anyone who has hung out with groups of middle-school or sorority girls well knows, can also be helped along by clothing choices. People who are being mirrored find themselves more inclined to like the person who is reflecting their self back at them. And since a vital part of diplomacy is making people like you, we weren’t surprised to see the picture above, of Clinton visiting with Daw Aung San Suu Kyi, Myanmar’s dissident leader.  They are either discussing Myanmar’s ties to North Korea or how difficult it is to find a really nice-quality decorative white scrunchie these days; it’s hard to tell which, but they are definitely enjoying one another’s company.

We also weren’t surprised by Clinton’s “Oh my gosh, you’re my totally long-lost Asian twin!!!” move because we remembered this meeting with Angela Merkel from a couple years back: 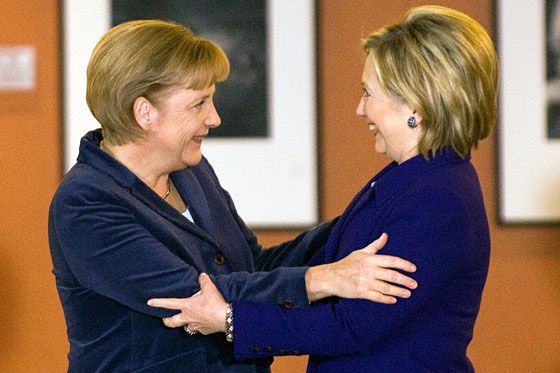 And this repeat performance. (Maybe Merkel and Clinton just call each other up before photo ops?)

Then there was this effort towards bipartisanship.

Of course, male diplomats do this, too — why do you think they all wear navy suits all the time? (And why do you think Hillary often favors dark pantsuits when she meets with male heads of state?) But it’s tougher to predict for women. So how much of the State Department’s budget is earmarked for Clinton’s sartorial intelligence-gathering team?